Abhishek Mishra along with navigator PVS Murthy have entered the record books as winners of the 13th edition of the Maruti Suzuki Desert Storm. Traversing harsh and unforgiving terrain, from Delhi to Rajasthan, the lead pair covered a distance of approximately 2,300 kilometres in their Grand Vitara. Participating in the Xtreme category, the duo completed the fifth and final stage, a distance of 330km from Bikaner to Jaipur, in 14 hours, 32 minutes and 28 seconds. The second spot in the Xtreme category was bagged by Harpreet Bawa and his navigator Ashwin Naik who were also piloting a Grand Vitara. The last spot on the podium was secured by Niju Padia and Shekhar V in a Mitsubishi Pajero. 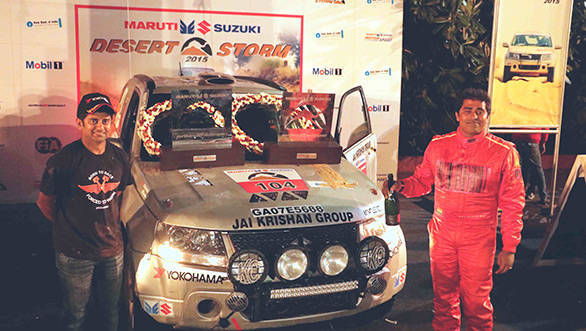 The Ndure category requires drivers to complete the same distance that drivers in Xtreme category cover, although in the  Time Speed Distance format. This category was aced by Vishnu Singh and his navigator Adithya Anthony in a Grand Vitara followed by Somdeb Chanda and Neerav Mehta in a Gypsy and the third position was grabbed by Sharavik Shah and Amit Kumar Saha who completed the Desert Storm in a Pajero.

Abhishek Mishra commented on his win saying, "I am super thrilled at this victory. All the weeks of hard work have paid off. I am eagerly looking forward to next year's rally. It takes a lot of hard work, concentration and following the basic principles of safe driving to complete the rally." 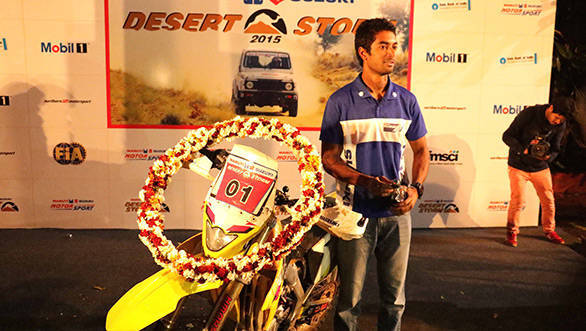 CS Santosh, who has just returned from a brilliant debut at the the Dakar rally this year, showcased his immense talent as he topped the time sheets in the Moto Quad category with a stunning time of  1 hour 29 minutes and 59 seconds. The second and third position were bagged by Jes David and Mohit Verma respectively. The Maruti Suzuki Desert Storm 2015 was a rally filled with challenges that tested the mental and physical strength of the participants as well as their machine's capacity to endure the pounding that the natural landscape meted out.

At the beginning, there were 130 participants, but as the rally progressed, the gruelling terrain took its toll on the riders and drivers as well as the machines. At the end, the rally was completed by only 69 of the participants - of which our road test editor Halley Prabhakar was one. Halley, who was driving for Team Polaris, finished first in the T3 category and 17th overall. He displayed nerves of steel as he tackled the heat and  untimely rain in a Polaris buggy. His sportsman's determination came to the fore when he recovered from a roll, got to the service park and back into the rally. It is for his incredible abilities behind the wheel that we at OVERDRIVE have dubbed him as Rally Halley.

Manohar Bhatt, vice president, marketing, Maruti Suzuki said, "The participants did really well and increased the bar for the next rally. It indeed was a test of man and machine, which only few bravehearts were able to finish and win. . . It's great to see the passion, for motorsport, which lies in their heart. Team Maruti Suzuki will always provide its motorists the best of the opportunities and vehicles to face such extreme sports. We hope to see all the daredevils to raise the bar higher. We will be back next year with another exciting and adrenaline pumping edition of the Maruti Suzuki Desert Storm rally. " 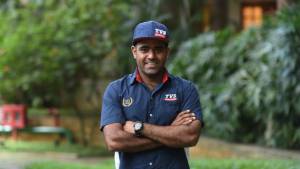 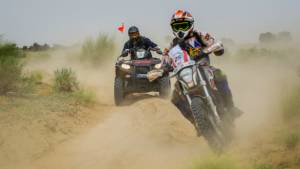 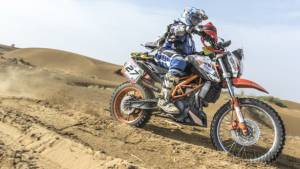