The roads in India are infamous for numerous accidents resulting in loss of lives and disability. According to statistics, around five lakh accidents happen annually in which 1.5 lakh lives are lost while three lakh people are left disabled. Recently, Union Minister Nitin Gadkari had announced that the government will spend Rs 11,000 crore to rectify the common accident spots. Meanwhile, the Maharashtra state government's economic survey report for 2015-16 has revealed that 1,19,479 road accidents have been reported in Mumbai in the last five years.

During the same period, a total of 3,22,076 accidents were reported across Maharashtra. This means that around 37 per cent of the accidents took place in Mumbai. This is an alarming number. Another worrying bit is that, during 2011-15, 2,596 lives were lost due to road accidents in Mumbai and 64,599 lives in the state of Maharashtra. According to these statistics, on a daily basis two lives are lost while a minimum of 12 people are left injured in Mumbai on account of road accidents.

"Fining is not the only solution. Licence suspension for three months was done initially through RTO officials presence on the spot, but a shortage of RTO staff has hampered the drive. The maximum number of accidents is witnessed either late at night or early morning because this is when bikers and motorists get free channels to speed," said joint commissioner of police (traffic) Milind Bharambe.

Needless to say, a lot of factors are responsible for causing road accidents in India. Apart from bad roads, lack of disciplined driving and poor infrastructure, human errors are among the biggest contributing factors. It's high time the concerned authorities started doing their bit in implementing traffic rules which will definitely reduce mishaps. Also, instead of blaming the authorities for every accident, we need to be  more responsible as well. 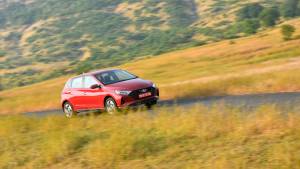