R Nataraj from TVS Racing registered a win at the sixth and final round of the 2-wheeler MRF FMSCI Indian National Rally Championship 2017 on Sunday. The round was held for the first time in Puttur, Dakshina Kannada, where as many as 45 riders from across India participated. Nataraj became overall champion after clinching a win in the Pro Expert A class, with a lead of more than 30 seconds over his team-mate Abdul Wahid. In the Expert Class A, Jeevan from Chikmagalur took the win followed by Asad Khan also fromChikmagalur. Vishwas SD who just returned from Raid De Himalaya ended up in the third place. In the 260 Group B, TVS Racing riders Rajendra RE, Imran and Sachin D took the top three spots. 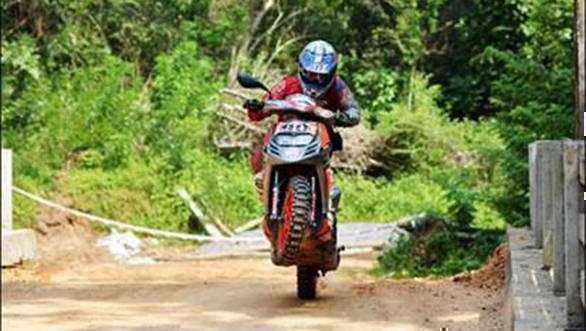 In the star of Karnataka category, Deepak Naidu won with a lead of 14 seconds over Dilip Raj from Chikmagalur and Mahantesh Ramappa, who finished second and third, respectively. After his win, Nataraj said, "I am very excited to win the final round, which was my fourth win in the six-round championship. This home state win means a lot to me." Earlier on Saturday, Puttur MLA Shakuntala T Shetty had flagged off the opening day recce and practice rounds.