The Circuit de la Sarthe is already abuzz with the sound of LMP1 cars storming around. And there appears to be a particularly raucous din coming from the pit garage of Porsche. Well, Mission 2014 might not have gone quite according to their plan, but Porsche seem to be attacking the 2015 edition of the greatest four-wheeler road race there is with tremendous gusto. And if their run during the first qualifying session is anything to go by, their race pace ought to be good as well. 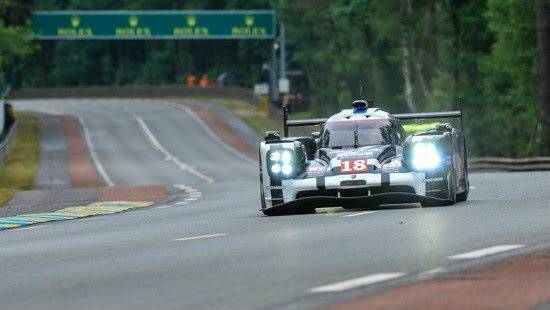 Porsche dominated the first qualifying session at the Circuit de la Sarthe, with their driver Neel Jani clocking a timing of 3min 16.887sec around the 13.6km long track. He was followed home by the other two Porsches, with Timo Bernhard's No 17 car setting a time of 3min 17.767sec. The third Porsche, with Nick Tandy at the wheel, set a time of 3min 19.297sec, which put them third on the grid.

The remarkable thing about Jani's lap of 3min 16.887s is that it is very likely to be the quickest pole position at Le Mans, since 1989, provided no one beats it in the remaining two qualifying sessions.

The next three slots also went to the Germans, with the three Audis of Loic Duval, Marco Bonanomi and Benoit Treluyer setting the fourth, fifth and sixth quickest times.

Unfortunately, things didn't go all that smoothly for the Toyota team. Although on pole last year, the quickest of the Toyota TS040s found itself six seconds off the pace of the Porsche, with Stephane Sarrazin setting the seventh quickest time. The second Toyota clocked the eighth fastest time, with Rebellion Racing's Mathias Beche setting a time of 3min 26.8sec, good enough for ninth.

The fastest Nissan was the No 23 car of Jann Mardenborough, who was, nonetheless slower than the leading LMP2 car, in twelfth place. The next GT-R was down in 21st place, with the third car down in 31st place.

In the LMP2 class, it was Richard Bradley who put KCMG on top with a timing of 3min 38.032sec. Clocking the fourteenth fastest time in the LMP2 class, and 27th fastest time overall, was the Team Murphy Prototype's ORECA Nissan, driven by Karun Chandhok, Nathaniel Berthon and Mark Patterson. The team did well to recover from the crash with Mark Patterson at the wheel, and India's hopes will be riding on Karun.