As far as automotive flagships go, the Volvo XC90 does quite a convincing job of being one. This large SUV was the first of this current generation of Volvo cars and still seems like the best embodiment of the attributes we've come to expect from the brand of late. It's comforting, safe and heavy on technology, made desirable with its restrained Scandinavian aesthetic.

Now though, the Volvo XC90 becomes the last car in Volvo India's current line-up to move to a petrol-only option. Does this switch work in the big SUV's favour? 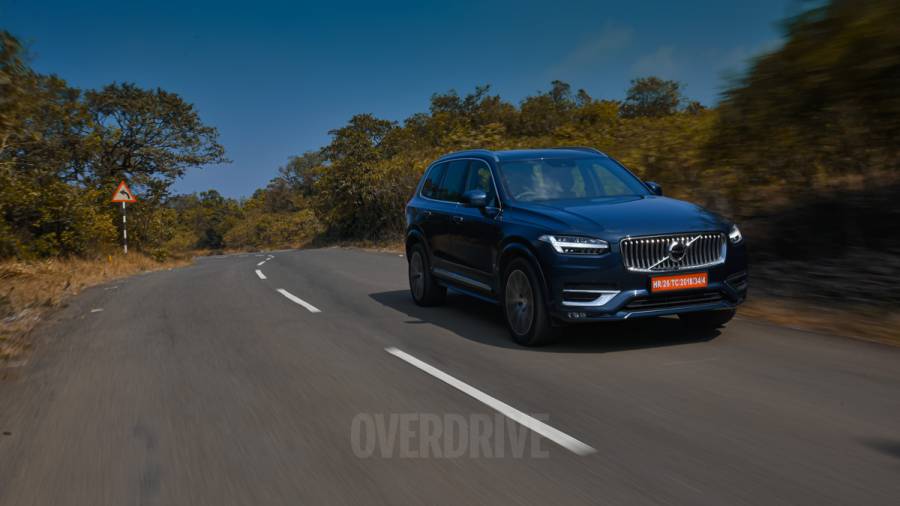 This update brings Volvo's new mild-hybrid powertrain to the XC90 range. The 2.0-litre turbo-petrol is the same as in the recently revised S90 and XC60, tuned up here to make 300PS and 420 Nm. This engine is different from the twin-charged 2.0-litre petrol that powers the plug-in hybrid version of the XC90, now available in the same Inscription trim as this petrol mild-hybrid.

Despite the XC90 weighing well over two tonnes, the small four-cylinder motor seems up to the job at hand in most situations. It's exceptionally refined at city speeds and the XC90 never really feels out of breath when you take things easy. It's the same on a steady highway cruise, the XC90 reaches highway speeds competently and holds speeds better still, if not with the assertiveness of its six-cylinder rivals. This also shows in our outright acceleration time which is a fairly brisk 7.2s. 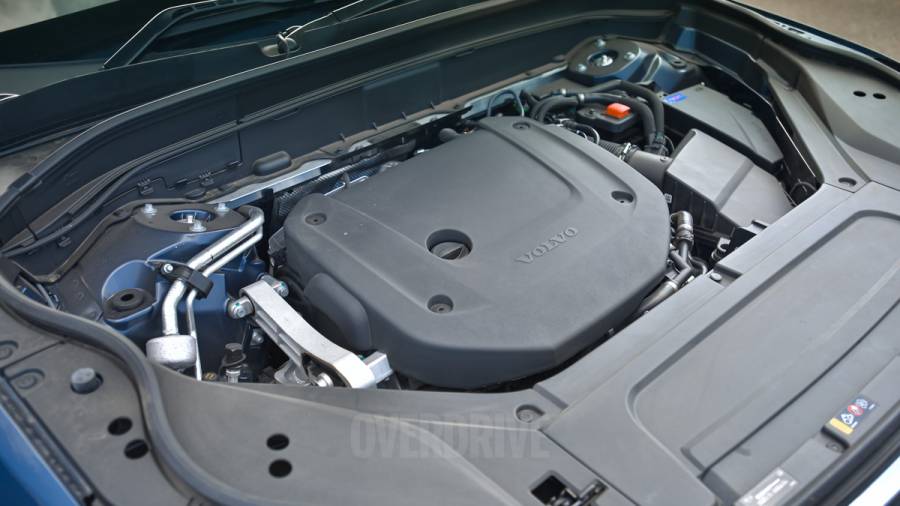 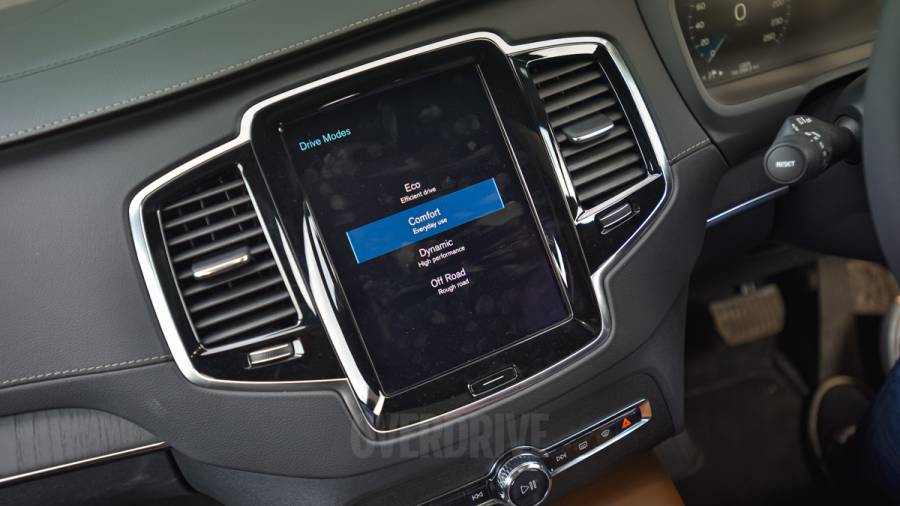 It's only when you call for a quick burst of acceleration that the lack of displacement becomes apparent. This B6 variant makes its peak torque slightly higher than the B5 variant in the smaller Volvos which seems to cause some hesitation to creep into the driving experience. The 8-speed Aisin gearbox is smooth and well-timed with its shifts, but as we've seen with other Volvos, downshifts during light to medium inputs such as with overtakes aren't as sharp as its best competition. This effect is a touch more apparent in the XC90 given its over 2-tonne curb weight and the slight lag from the motor. Thankfully, drive modes haven't been deleted with this update, so you can dial out this slight indecisiveness from the engine and gearbox when you need it to be more alert. But in any situation, XC90 is steadfastly focused on delivering a largely calm, linear experience whichever mode you choose.

The choice of drive modes brings with it some other advantages. The much larger XC90 is more efficient in city conditions than the smaller XC60 when driven in the perfectly usable Eco mode, at 10.11 kmpl. The overall efficiency is not as good though at 10.41 kmpl, held back by the 11.31 kmpl highway figure. As always, the XC90 makes for a serene experience whether you are being chauffeured around or from behind the wheel. The air suspension is well-judged and manages to fully translate the SPA architecture's inherent solidity into a confident driving experience. Except for deep potholes and abrupt cracks, the XC90 isolates you from most road imperfections. The big SUV stays level and poised at any speed with little pitch and dive. As in other Volvos, the steering is also well-judged, it's light and effortless at city speeds but has just enough precision for highway cruising. This combined with the good sightlines makes the XC90 quite easy to manoeuvre in our crowded traffic. The lighter engine, and with none of the hybrid's electrical gubbins, allow the sportier setting for the air suspension to add another dimension to the XC90's driving experience. So if you find yourself on a winding stretch of road, the XC90 continues to remain confident. There is as much roll as you would expect from a large SUV such as this one, but these movements are well controlled, never making the XC90 feel out of its depth. There haven't been design changes on the inside of the Volvo XC90 with this update. And you wouldn't know that this look has been around since 2015 given how well-executed it was to begin with. The grey and tan theme on this Inscription variant complements the Volvo's soothing Scandinavian demeanour very well, especially with the smart use of the metallic chamfering, glass highlights and the grey open-pore wood. 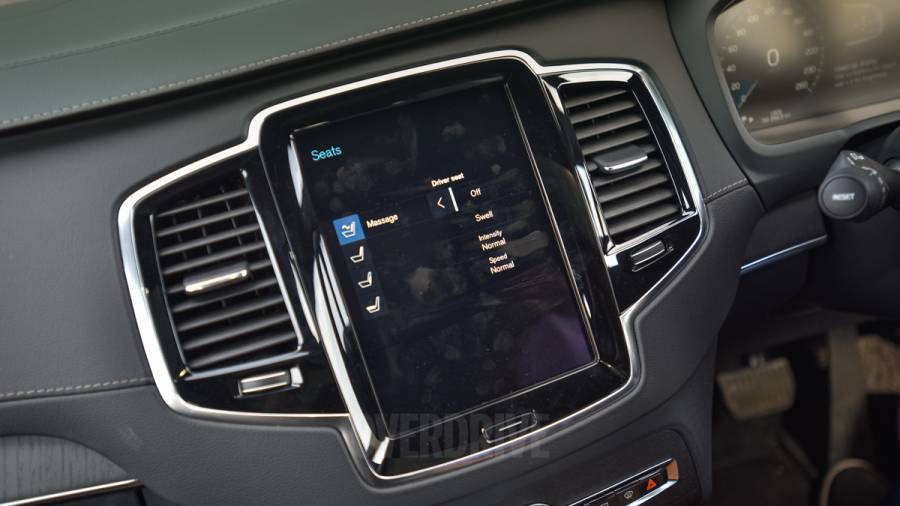 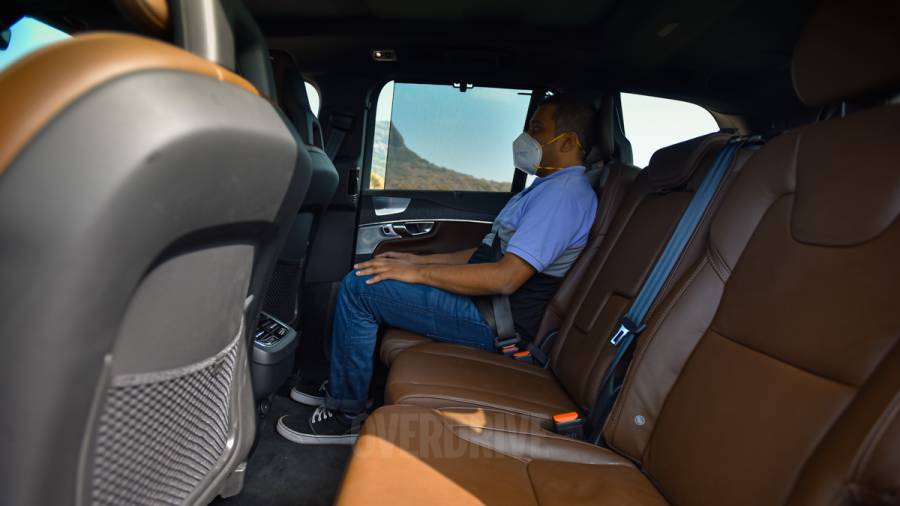 The vast list of features adds to this experience, although the trick new Google-based infotainment system hasn't found its way to the XC90 range yet. Despite this, passengers in the first two rows are very well catered to. There's four-zone climate control, the front seats offer full power adjustment with extendable bases and bolsters, along with heating, cooling and massaging functions. And while this Inscription trim is a seven-seater, without the lavish second-row chairs in the earlier Excellence variants, there's still a sliding and reclining function for the outboard seats given the practical 40:20:40 split. The seats themselves are supportive all around with just the right contours and padding. The third row however is best suited for children. Access to this space isn't easy, especially since the second row doesn't tumble, and the sliding function has you skip over the second row to enter. There's just enough knee room for smaller adults when the second row is fully forward but you will find yourself in a knee's up position, even though the fairly large quarter glass doesn't make this place too stuffy. We also missed separate USB ports for third-row occupants. We also would have liked a power-folding function for these seats, which would have made utilizing the massively practical boot easier. 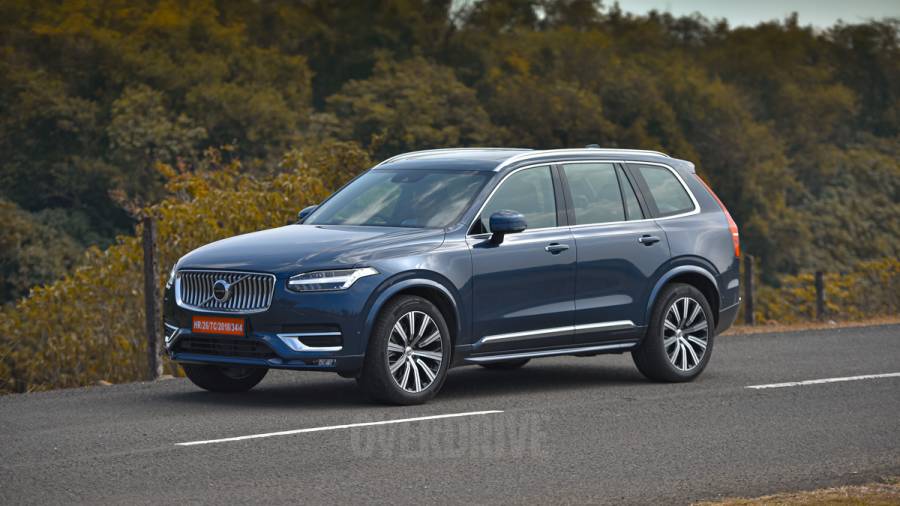 Unlike the petrol XC60, the Volvo flagship doesn't get any visual updates with this change. There is a bit more chrome around the bumpers and a bit less on the pillar when seen alongside the Excellence variants, but the simple yet crisp bodywork and good proportions still look contemporary. The 20-inch alloys continue with a new, more efficient design. The XC90 adds a simple head-up display over lesser Volvo models from the safety standpoint, but the updated ADAS system still hasn't made its way here. This system does give you adaptive cruise control, emergency braking and blind-spot detection, among other things, but isn't quite as seamlessly integrated as the newer system on the S90 and XC60. There's also full airbag coverage, hill descent control and a clear 360-degree camera. 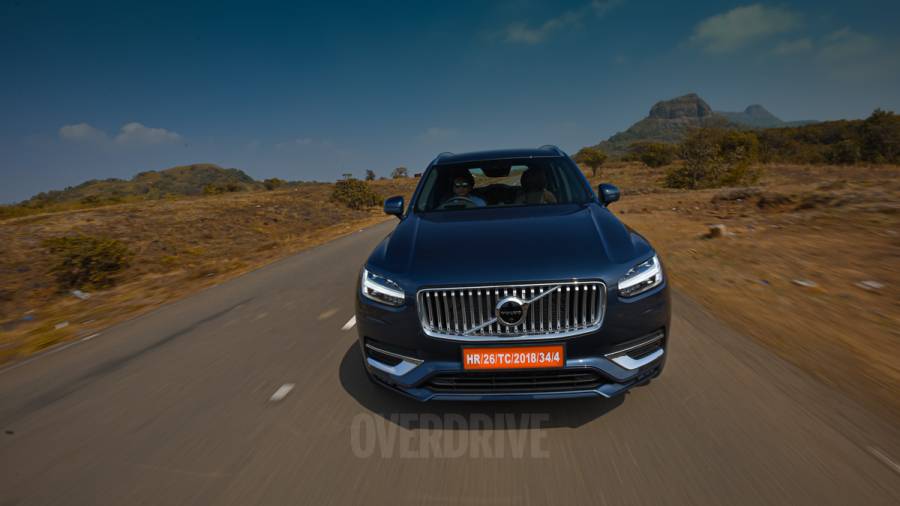 At just under Rs 91 lakh, the XC90's calling card is its price. Sure there isn't the sense of occasion of a six-cylinder motor and the third row could be better executed, but the Volvo XC90 still does comfort as well as any of its rivals, all of which will set you back well over the crore mark. Combined with an endearing breadth of ability from the drivetrain, the Volvo is a compelling choice as a thinking man's large luxury SUV.