Monster Yamaha's Maverick Vinales claimed pole position for the season-opening round of the 2019 MotoGP season, the Qatar GP, at the Losail International Circuit. The Spanish rider qualified ahead of Ducati's Andrea Dovizioso and Repsol Honda's Marc Marquez.

Vinales put in a very strong performance in Q2 at Losail, ultimately setting a time of 1min 53.546sec, which was a lap that could not be beaten. In fact, the lap was two-tenths of a second quicker than his nearest rival. 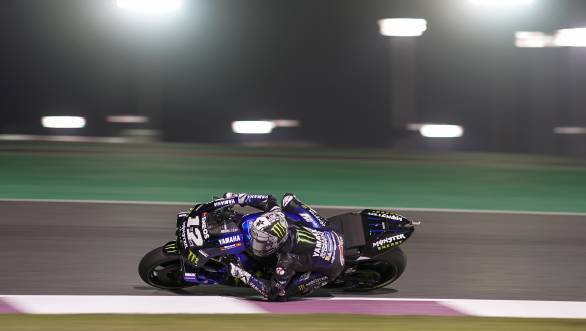 Behind the Yamaha rider, however, things were far closer. Dovizioso, who took his Ducati to second on the grid, only just managed to get the better of defending champion Marquez by 0.001s. Marquez lines up third on the grid for tomorrow's race.

It was a disappointing qualifying session for Jorge Lorenzo, who failed to make it to Q2 in his first race for Repsol Honda. Lorenzo crashed out at the second turn in his final attempt at setting a competitive time during Q1, leaving him down in 15th position on the grid for tomorrow's race. It was also a disappointing session for Valentino Rossi, who didn't manage to get a solid lap in during Q1, and hence was unable to make it to Q2. Rossi will start the race from 14th on the grid.

The third row of the grid has Danilo Petrucci in seventh position, while Franco Morbidelli occupies eighth position on the second Petronas Yamaha, and Takaaki Nakagami slots in ninth for LCR Honda. Suzuki rider Alex Rins rounded off the top 10, having edged out his teammate Joan Mir for the slot.

Complete qualifying results for the Qatar MotoGP can be found here.