The second round of the 2019 Champions Yacht Club FMSCI Indian National Rally Championship, the Rally of Coimbatore, was full of surprises. The event was won by INRC3 competitor Chetan Shivram of Akshara Racing. Shivram, and co-driver Dilip Sharan, moved into the lead of the event on the first day of the rally, and continued their good form on the Sunday of the event as well, taking a fine victory.

On the first day of the rally, it was Shivram and Sharan who proved to be the most comfortable in the treacherous terrain, marked by slushy conditions and loose sand, completing the day's five stages with a time of 1hr 05min 32.900sec. Suhem Kabeer and co-driver J Jeevarathinam ended the day second in the rankings. Third at the end of the first day was Younas Ilyas and Harish Gowda. 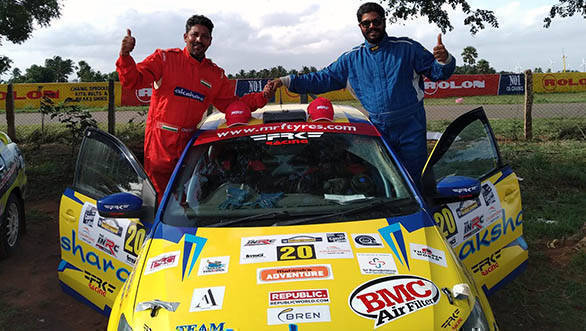 Disaster struck Mahindra Adventure's Gaurav Gill and co-driver Musa Sherif. While the duo posted the fastest times in the first three stages on Day 1, they eventually picked up a puncture on the Super XUV300. They eventually had to pull out of the rally with a technical malfunction.

The going wasn't any easier for Arka Motorsports' Karna Kadur, or Race Concepts' Vikram Mathias, both of whom fell out of contention during the third stage of the rally. Round 1 winner Dean Mascarenhas managed to finish, but down in 20th, after his car got stuck in slush during the second stage. Curiously enough, none of the INRC entries were able to complete the first day of the rally.

The second day of the rally saw Shivram convert his overnight lead into victory. Shivram, and his brother Dilip Sharan who also happens to be his co-driver, also won the INRC3 category. Their main rivals Suhem and Jeevarathinam had trouble, getting stuck in slush on the first stage of the day. This cost them six minutes, although they were able to take third place in the INRC3 class of the rally.

Meanwhile, the task of keeping Shivram honest fell to Younas Ilyas of Race Concepts, who even won a couple of stages. However, at the end of the day, he had to settle for second place, ending the day 4.600sec behind the victor. This was enough to hand him the win in the INRC2 class. Third place overall, and second place in the INRC3, went to Team Champions' Fabid Ahmer, co-driven by Sanath G. Mascarenhas, co-driven by Shruptha Padival, clawed his way back up to 10th place. He took second place in the INRC2 category.