With the Yaris, Toyota is entering the mid-size car segment for the first time in India. Expectations from it are high, and while it almost scores full marks on features, the Toyota Yaris may lose out because it's only being offered with a petrol 1.5 litre engine. Nevertheless it's a welcome addition in the mid-size segment and because it does nearly everything in a fairly decent manner, the Toyota Yaris may just be an alternative to the likes of the Honda City, Hyundai Verna Maruti-Suzuki Ciaz, etc. 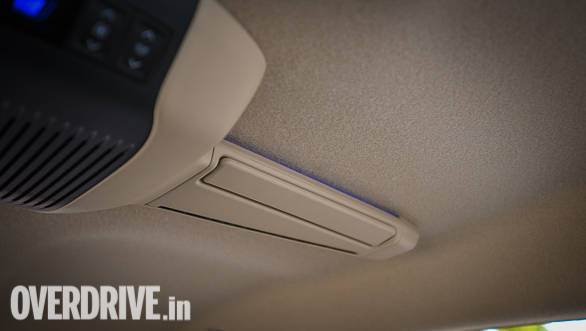 The Toyota Yaris does not come with a sunroof. But I think that is good because you don't really need one in a hot country like ours. Normally the huge glass area of the sunroof and the thin panels below it, allow heat into the cabin and force the AC to work that much harder. Doing away with a sunroof and instead putting in roof mounted AC vents, is a masterstroke because they are extremely good at directing cool air for the rear seat occupants comfort. Normally, in vehicles from this or even higher segments, you get AC vents placed low down in the back of the centre console or on the insides of the B-pillar and these do not cool as effectively as the roof-mounted ones on the Toyota Yaris. Interestingly, these vents also have a substantial swivel, and in case the back seat is not occupied, the air can also be directed onto the front seats, to further enhance cooling. These AC vents come with ambient lighting and there are also switches at the rear to control the blower speeds and lighting. 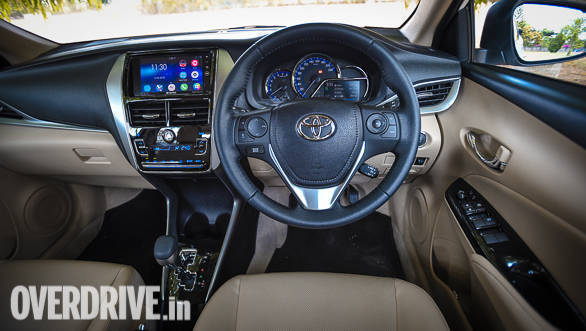 Given the fact that India has the highest number of road fatalities in the world, Toyota needs to be credited for focusing on safety and offering seven SRS airbags, including driver and passenger airbags, side airbags, curtain shield airbags, as well as knee airbags, which are a first for this segment of vehicles. 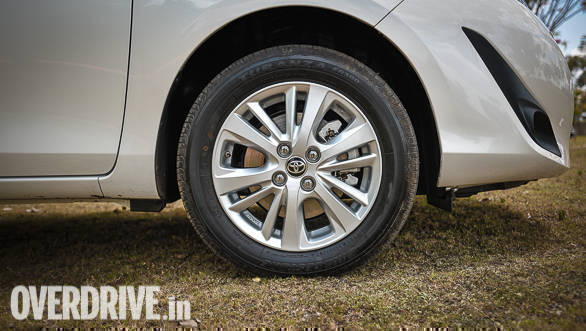 The range topping trim seen here gets 15-inch alloy wheels shod with skinny 185-section tyres. The dimensions of the tyres and wheels remain similar throughout the range

In our crazy and chaotic driving conditions, good braking is very essential in our cars. And the Toyota Yaris comes with all wheel disc brakes that provide confidence inspiring stopping. It also has ABS and EBD and the first impression is that the Yaris takes less distance and time to slow down and stop than its rivals. Of course only a proper test with our measuring equipment will confirm this. 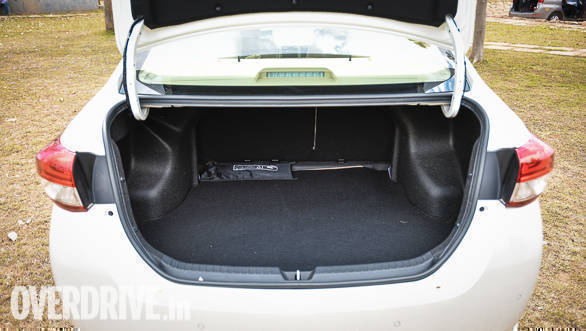 The 476l boot may not be the best in class, but is designed quite wisely without too many protrusions eating into the usable space

One of the reasons we Indians like a car with a boot is its additional carrying capacity, which at 476 litres the Toyota Yaris certainly has. The split folding rear seat also increases cargo space substantially. Another benefit of a boot is that it shields your luggage from prying eyes. This is not a feature found in this segment and again Toyota need to be praised for providing it. Adjusting the seat and finding the ideal driving position becomes so easy with this powered seat feature, that you soon come to appreciate it. While the roof mounted rear AC vents are sure to be appreciated, anyone who is tall will find that the headroom is limited. The overall height of the Toyota Yaris is less than some of its competitors and this along with the sharply sloping roofline, restricts headroom at the rear. The fact that the seat is also placed further back and closer to the rear windscreen only worsens matters.

2) Sluggish and reluctant to rev engine 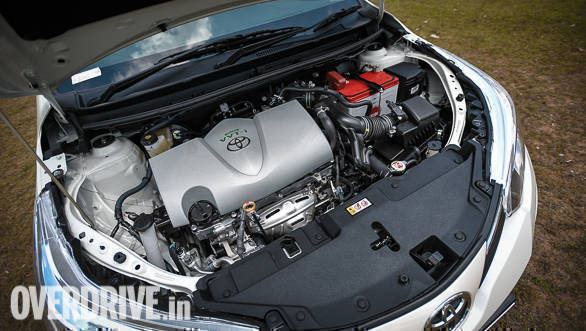 While the engine does make 107 PS and is fairly responsive at lower revs, it's sluggish in the mid-range and reluctant to rev and build up speed. Higher in the rev range above 4000 rpm, it also becomes fairly vocal and loud. And it's nowhere as refined or willing as the petrol engines found in the Honda City and Hyundai Verna. 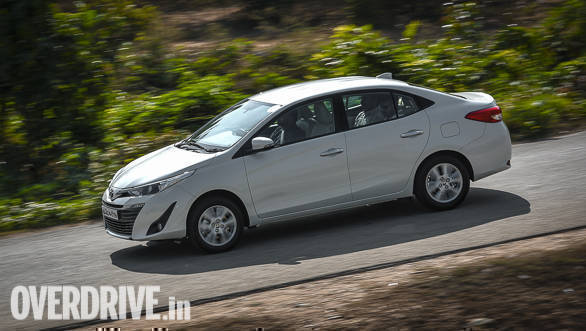 While the overall proportions of the Toyota Yaris are quite good and the big black air dam in the front bumper adds an element of sportiness to the styling, the overall design is quite simple and understated, something many Indian customers who prefer flashy looks may not quite appreciate. The ride quality of the Toyota Yaris is quite nice and copes well with our broken and less than perfect roads. But the steering feels vague and does not communicate as well as one would like. Toyota has done a very fine job of isolating vibrations on the Yaris. They have also fitted acoustic and vibration control glass that helps limit the amount of noise that seeps into the cabin. Ironically, while Toyota has attempted to curtail noise from the outside, the AC blowers (both at the front and back) are quite loud, especially on the higher speed settings. 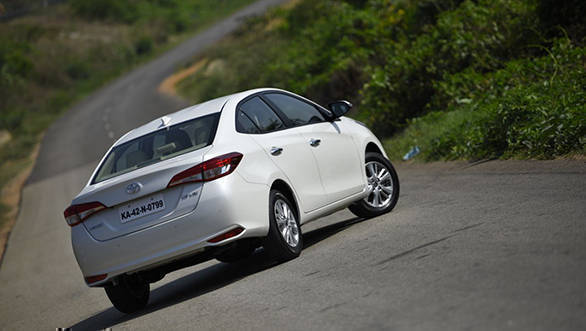 The Toyota Yaris is a competent mid-size sedan with some first-rate features. But it does not excel in some areas and also loses out to its rivals because it lacks a diesel engine. Rear seat headroom and the sluggish engine may also prove to be a disappointment.

Toyota Yaris sedan launched in the UAE, bookings start in India next month 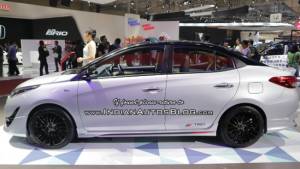 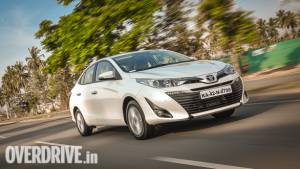