The convoy of the 20th Raid de Himalaya, including participant vehicles and service vehicles are now stuck in a huge traffic jam on the Jammu-Srinagar highway. The 2018 edition of the Raid is meant to start on the 8th of October in Leh, but the 40 km-long traffic jam has the competitors, teams, and organisers worried.

The team manager of the Mahindra Adventure rally programme, Philippos Mathai said that their trucks for the Raid were stuck near Udhampur for four days. "The traffic finally began to move at about midnight. But the line-up is so long that our trucks could start moving only at about 6am. Even then, the jams up ahead and the heavy traffic on the road is impeding movement," Mathai explained. 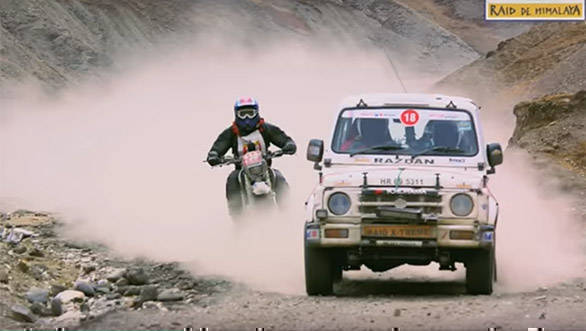 The TVS Racing team is also stuck in the jam. Achu S Nair, part of the management staff for Team TVS, said, "Our trucks are still in Udhampur, about 600 km from Leh. They haven't even crossed the Chenani-Nashri tunnel till now. It's a very worrying situation, and we are looking at all alternatives."

Mathai himself is meant to compete for Mahindra Adventure at the Raid with Amittrajit Ghosh, the team's other driver. Mathai himself said that if the trucks don't reach Leh by the 7th of October, the SuperXUVs would be unloaded and driven to Leh, in order to be there by the second day of scrutiny.

Unfortunately for Team TVS, that is not an option, "These are race-tuned bikes, and are not meant for road-use. Riding them to Leh is out of question. It will severely impact their performance. It is important that our racing bikes are in good shape when Raid de Himalaya begins." Team TVS is exploring the option of hiring smaller transport vehicles on which the bikes can be loaded and brought to Leh.

Parmar said the decision to begin the Raid de Himalaya from Leh this year turned out to be providential. "If we had gone ahead with our usual start from Shimla or Manali before heading towards Kaza, we would have had to cancel it. The competitors and teams are now facing major logistics problems, because of severe traffic jams. If the vehicles do not reach Leh on time, it will impact the Raid," Parmar conceded.