It has been a tricky season for former Malaysian Superbike Champion K Rajini, who had a combination of mixed luck through the year. The fourth round of the championship, held at Sepang, was one of the better events for the Indian racer of Team RACR. Rajini finished the first race second, but managed to win the second race. His victory in race two was particularly commendable, given that he beat former Moto2 rider, Azlan Shah. 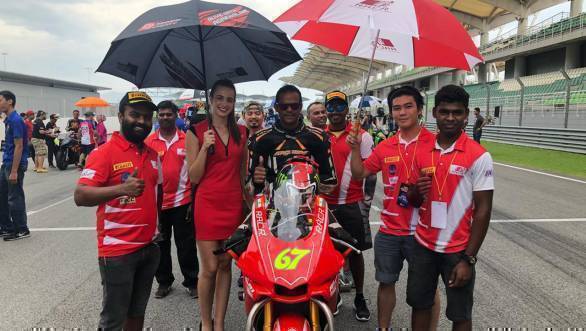 Third overall for K Rajini in the 2018 Malaysian Superbike Championship

The fifth and final round, however, was yet another mixed bag for Rajini. In the first race, he finished second. However, in the second race, his lack of sponsorship and funding proved to be too huge a hurdle to overcome.

When Rajini reached the grid, he had slick tyres on his Yamaha YZF R1. This, because the weather was good and all seemed well at that point. However, when they were on the grid, the rain came down, and the race was declared a "wet race". This meant that they had to change their tyres to wet tyres, which Rajini didn't have. During the sighting lap, it was nearly impossible to ride in wet conditions on slick tyres. This meant that he had to withdraw from the race, because it was far too unsafe to ride in the wet on slicks.

The fact that he couldn't compete in the final race of the season resulted in him slipping from runner-up in the championship, to second runner-up by one point.

However, Rajini, while thanking his sponsors, friends and supporters for 2018, said he hoped to do better in 2019. More sponsorship and funding would go a long way in helping the 2015 MSBK champion return to title-winning ways.