The ninth edition of the Afriquia Merzouga Rally began on Sunday, the 15th of April, 2018, with a Prologue Stage of five kilometres being held in the Moroccan Desert. The Prologue Stage determines the start order for the rest of the rally, and was crucial for the all the teams, especially the two Indian teams competing in the event. 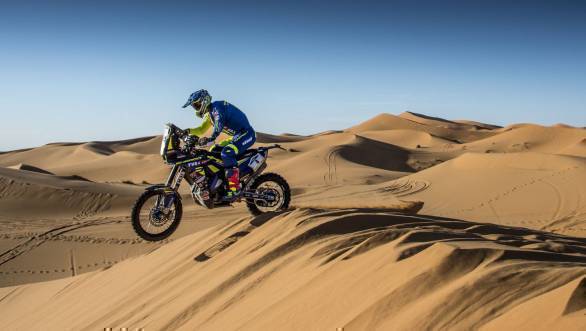 Joan Pedrero Garcia leads the way for the Sherco TVS Team, finishing fourth in the Prologue

The Sherco TVS Factory Rally team's Joan Pedrero Garcia finished the Prologue Stage in fourth position, followed by the team's other rider Lorenzo Santolino in P5. The team two riders who are making their debut in the event - Duplessis Diego Martin and Vanni Cominotto - completed the stage in P15 and P34 respectively.

Naturally, Pedrero, who led the way was pleased with his performance, saying, "Merzouga is one of the toughest Rallies as a part of the pre-Dakar series. I am happy with this solid start and will do my best to keep the momentum going." The Hero MotoSports Team Rally outfit, with Oriol Mena and CS Santosh as riders, had a solid start too. Mena, who finished seventh overall in the 2018 Dakar, ended the stage in 13th place, while CS Santosh ended the Prologue 27th. Supporting his team-mates, this time as mentor, is Joaquim Rodrigues, who is as yet recovering from injuries sustained in the 2018 Dakar Rally.

Speaking after the Prologue, CS Santosh stated, "It's the first day of the Merzouga Rally and nerves are always flying. It's always good to get the prologue out of the way. It was nice to go out and get the rally started. Looking forward to the next few days of really rally racing."

Stage 1 of the 2018 Merzouga Rally will see the riders cover a distance of 206 kilometres, divided into two loops with a separate special. Certain sections of the route is expected to be challenging with a mix of quick stretches and large dunes.