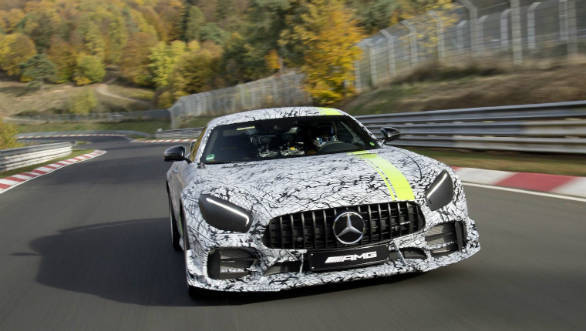 Very few details are available at the moment. The company has let out, ironically, only the car's efficiency figures. The GT R Pro's claimed fuel efficeicy figure is 8 kmpl while its emits 284 g/km of carbon dioxide.

The sole image released by the company shows a camouflaged GT R Pro. There are some notable changes though like the much more aggresive front bumper which adds a new winglets, larger air intakes and a more pronounced splitter. There is added cooling as well, as seen by the radiators behind the intakes.

Apart from the aero tweaks, the GT R Pro should also come with a power bump. The AMG GT R makes 577PS and 700 Nm from its 4.0-litre twin-turbo V8. This can be expected to cross the 600PS mark, as in the E 63 S. This motor is mated to a nine-speed auto. The GT R Pro seems to have been influenced by its race-going GT3 cousin and should come with some amount of weight-saving. Expect more carbon-fibre componentry and a relatively sparse interior.

Closer to motor racing than ever before: the new Mercedes-AMG GT R PRO. World premiere at the Los Angeles Auto Show on 28th of November🚦🏁 #AMG

The entire GT sportscar line-up is also expected to get some slight aero and design updates.

The GT R Pro is the latest addition to what has now become a family of sportscar under the GT moniker. Carmakers have always sold the dream of a racing car for the road but recently we've been coming closer than ever to see that being fulfilled, which numerous carmakers like Porsche, BMW and so on selling such cars. The Mercedes-AMG GT R Pro adds to that list.