2018 INRC: Vicky Chandhok to compete in Chennai Rally in a VW Polo R2

The first round of the 2018 MRF FMSCI Indian National Rally Championship (INRC) will begin on the 27th of April 2018 in Chennai. Joining the list of drivers competing in the event is Vicky Chandhok who is a former FMSCI president, and an old hand as far as racing and rallying in India goes. Chandhok, who last competed in a motorsport event in 2000, will be making a one-off return to the sport in a Volkswagen Polo R2, developed by Volkswagen Motorsport India. R Chandramouli from Bangalore will be Chandhok's navigator at the event. 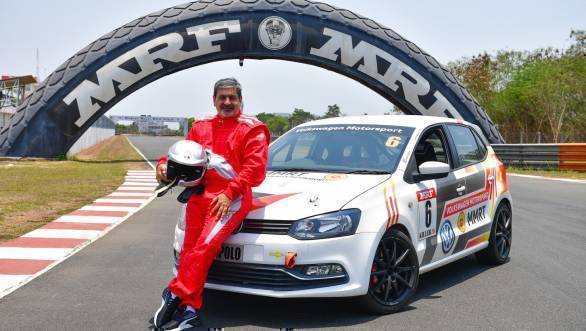 Speaking of his return to motorsport, in a competitive role, after a long period of time, Chandhok said, "I am truly excited to be back rallying competitively after a break of over 17 years. The competition has surely evolved since the last time I rallied and I want to test myself against the best in the country."

Chandhok added that a test drive of the Polo R2 earlier this year at the Chennai track convinced him that it was the perfect machine in which to make his comeback.

Sirish Vissa, head of Volkswagen Motorsport India said, "Alongside the development of our Ameo Cup cars for the upcoming season, the team has also been working simultaneously on the development of the Volkswagen Polo R2 rally car. The R2 rally car has gone through extensive testing and we are excited to see how well the car will perform this season. It is an honour for us that Vicky will be in the driving seat of our rally spec Volkswagen Polo R2 and we are excited to see how the car, driver and navigator all come together!"

Vicky Chandhok is the father of Karun Chandhok, who is only the second Indian driver to make it to Formula 1, and the only Indian driver to compete at Le Mans. Chandhok Sr began his racing career back in 1972 and continued rallying until 2000 - the South India Rally that year, which he won, was his last event. In addition, he has raced Formula Fords, Formula Indians, Formula 3 and Formula 2 machines in Indian circuit racing. He has won events like the Himalayan Rally, Rallye d'Endurance, South India Rally, Popular Rally and Charminar Challenge over the course of his career.