The fourth round of the 2018 MRF MMSC FMSCI Indian National Motorcycle Racing Championship was held last weekend at the MMRT near Chennai.

In qualifying on Friday, September 21, Rajiv Sethu of Honda Ten10 Racing took pole in the Super Sport Indian 165cc. His 1m 54.999s put him ahead championship leader Jagan Kumar and Deepak Ravikumar, both from TVS Racing. He couldn't convert this into a win on Saturday though. TVS Racing took home a 1-2 finish in Race 1 with KY Ahamed scoring a tense last minute victory. He was locked in a tight battle with Kumar and Sethu, until the latter crashed out in the last lap. Jagan Kumar finished second and S Mathana Kumar bagged the third spot. Sethu recovered from his error by winning Sunday's race, which was also a close finish. Kumar was in the lead for the first half of the race when Sethu suffered a gearing problem, but he fought back in the latter half. Kumar finished second, consolidating his position at the top of the championship with an 18 point lead. His 148 points put him ahead of KY Ahamed. 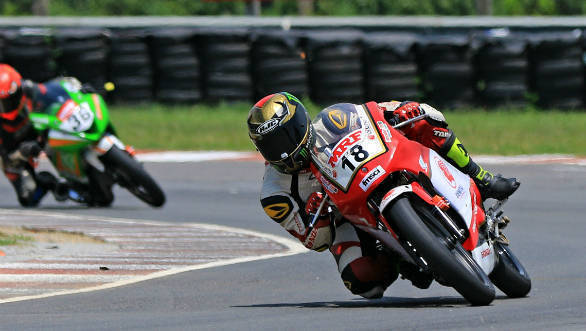 In the Pro-Stock 301-400cc category, Prabhu Arunagiri (Team Alisha Abdullah) qualified on pole on Friday. Sparks Racing's Rahil Pilari Shetty was the second quickest followed by the championship leader in this category, Amarnath Menon (Gusto Racing). Menon also crashed out of this category's first race on Saturday. This led to a red-flag and consequently a restart, but Arunagiri led from here on to win the race comfortably. The Sparks Racing duo of Rahil Shetty and Peddu Sriharsha took up the other two podium spots respectively. Arunagiri repeated this feat in Race 2, now putting the championship in a critical situation with only five points separating the top three. Satyanarayana Raju and Amarnath Menon, both from Gusto racing, are at 119 and 118 points, while Arunagiri now has 114. 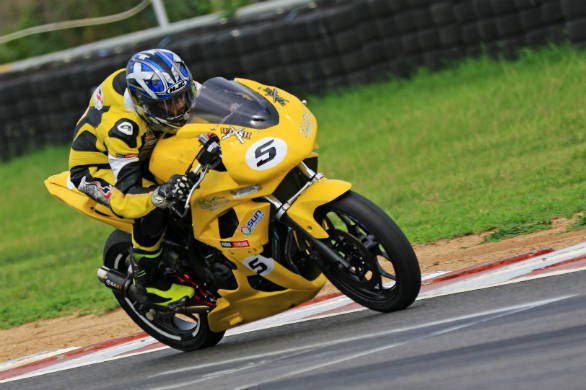 Mithun Kumar of Honda Ten10 Racing topped the qualifying session in the Pro-Stock 165cc class with Naresh Babu (RACR) and Senthil Kumar (Honda Ten10 Racing) completing the front row. Kumar finished first in the race on Saturday, followed by Kevin Kannan from Rockers Racing and Rahil Shetty (Sparks Racing). Rahil Pillari Shetty, a 20-year-old from Hyderabad, scored his first win of the season in this category in the second race held on Sunday. 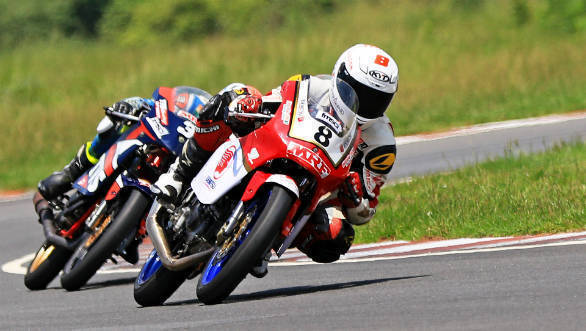 On Saturday, Jennifer consolidated her position at the top of the Girls (165cc) category. Ryhana Bee finished second and Shruthi Nagarajan (Apex Racing Academy) finished third. Karthik Mateti continued his dominating run in the Novice category buy winning the sole race in this category on Sunday. He was followed by Varun Sobhan of Speed Up Racing and Venkatesan I, a privateer from Chennai, in the standings. In the Yamaha MMSC One-Make Championship (Novice) class, Varun Sobhan won both races. In Race 1, he was followed by Ajai Xavier and Hari Prasath while Race 2 saw him lead Abhimanyu Gautam and Sanjay Kumar.