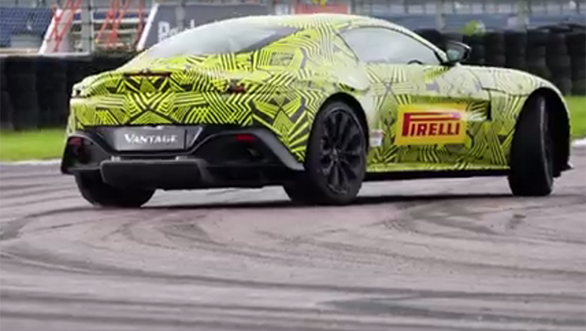 The new Vantage features slim teardrop head lamps, similarly slim tail lamps and some serious curves along the body lines. It will come powered by a 4.0-litre bi-turbo V8 which has been sourced from Mercedes-AMG. Details of the power output are not yet available, but we expect it to produce around 500PS. The large Pirelli stickers on Vantage's doors suggests that will be the choice of rubber on the Vantage, which will transfer all its power to the rear wheels. It will be underpinned by a lighter chassis with more aluminium elements. The combo should be able to propel it to 100kmph in 4 seconds. Just last week, the Vantage was also spied being tested at the Nurburgring.

Here's the teaser video to kickstart your weekend: