The Volkswagen Tiguan features among one the most anticipated launches by the German car manufacturer in India. While that is expected to happen sometime in next year, Volkswagen has revealed a teaser of a 7-seat Tiguan Allspace. This will be a larger version of the Tiguan with a three-row seven seater arrangement. 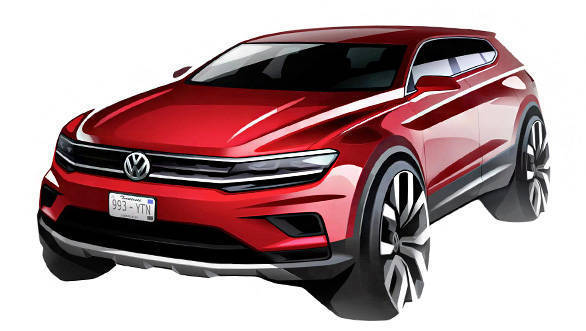 The 2017 Volkswagen Tiguan Allspace gets a 11cm longer wheelbase when compared to the regular version. Volkswagen states that the larger dimension will translate into a grander cabin. The company also claims that the Tiguan Allspace will be offered with with an attractive range of equipment features. The European version of the longer Tiguan will be called Allspace, while the models for North America and China would stick to the model name Tiguan.

The other three row SUV from the Volkswagen is the Atlas. This one will be manufactured at the company's plant in Chattanooga, Tennessee. The larger Tiguan will be manufactured at the facility in Puebla, Mexico. The Volkswagen Tiguan is the brand's first SUV to be based on the new MQB (Modularer Querbaukasten in German, or Modular Transverse Matrix) platform. Similar to the regular model, the Allspace too will be powered by the 2.0-litre diesel motors that produce a power in the range of 115PS to 240PS. The petrol variants will make use of a turbocharged 1.4-litre motor, making power in the range of 125PS to 150PS. In addition, there will also be a more powerful 2.0-litre mill that makes 220PS.

More details on the 2017 Volkswagen Tiguan Allspace will surface at the time of the world premier of the SUV at the North American International Auto Show, scheduled to take place between January 8 - 22, 2017