Skoda has unveiled its first all-electric vehicle, the Vision E concept, at the 2017 Shanghai Auto Show. The Skoda Vision E is based on the VW Group's MEB (modular electrification toolkit) platform. While Skoda hasn't given out too many specifics on the drivetrain, it has stated that the car produces 306PS of power. While top speed is rated at 180kmph, Skoda says that the car can go up to 500km in one charge with the help of a brake energy recovery system. The Vision E features inductive charging, which basically means you have to park the car over a floor panel which is connected to a power source. This will charge the car's lithium-ion batteries overnight automatically, just like with a phone's wireless charger. Skoda says that it also features a quick charging option which will give 80 per cent power in half an hour. 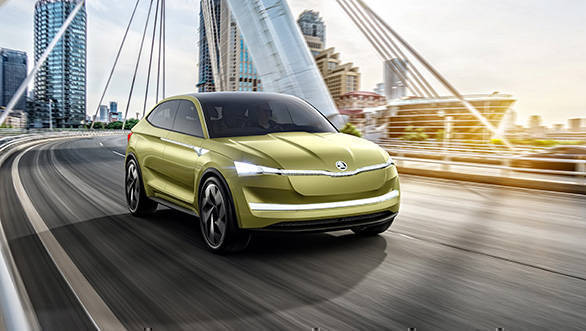 The Skoda Vision E features level 3 autonomy, which means you can hand over controls (although you still have to stay alert) to the car in traffic jams, highways and parking lots. The car's autonomous driving system is capable of changing lanes on the highway or taking evasive action and also overtaking other cars. It also features what Skoda calls an Educated Parking Function, which remembers and finds a driver's preferred parking spot. The driver has to complete a full parking manoeuvre twice for the car to learn what needs to be done. 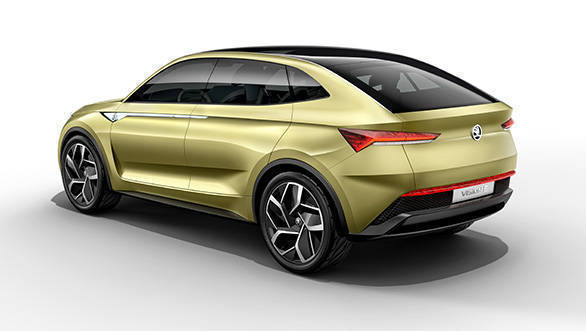 Other advanced tech that the Skoda Vision E offers is an eye tracking function which, as the name suggests, constantly monitors the driver's eye movements. Apart from being able to analyse how attentive the driver is, it also displays the required information at the right time and right place on one of the screens. 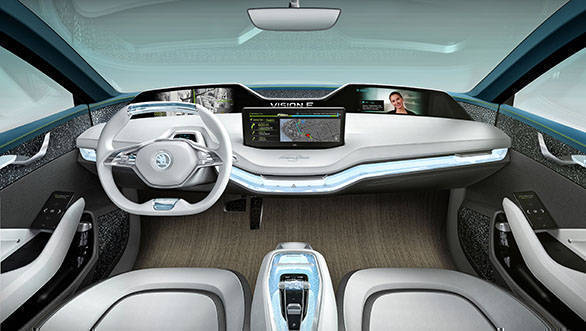 In terms of the design, the Skoda Vision E concept is 4,688mm long, 1,924mm wide and 1,591 metres high. The wheelbase of the car is 2,851mm long, and along with the short overhangs, Skoda says cabin space is generous. The interior features a very simple design with touchscreens replacing buttons. There are four shell-shaped seats and each passenger gets their own screen. The seats can be rotated outwards by 20 degrees when the doors open for easy ingress and egress. The doors are counter opening, which means the rear doors are essentially suicide doors.

Skoda says that the company will launch as plug-in hybrid car by 2019 and five all-electric vehicles by 2025. It is also working on developing higher levels of autonomy for their vehicles.