The second stage of the OiLibya Rally of Morocco was riddled with issues, including flooded riverbeds, that meant there were various things that difficulties that the organisers had to contend with even before the start of the third stage of the rally. This meant that the previous plans for the stage were scrapped, and what was meant to be a two-part special stage was then modified. 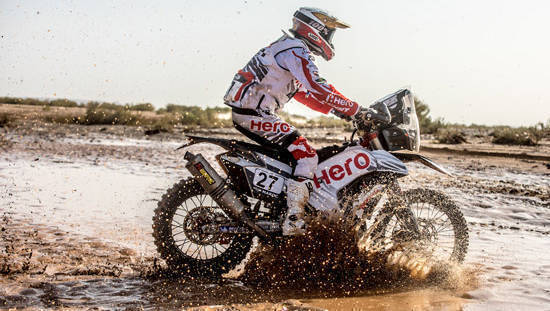 The conditions between Erfoud and Erg Lihoudi were not idea, and the organisers scrapped the first part of the stage. Riders began the modified version of the stage at noon, and contested a distance of 142km. At the end of the third stage, that comprised various types of terrain and sand dunes, both riders improved their positions. JRod ended the stage in 9th place, moving up to 6th overall in the rally. CS Santosh ended the stage 15th, and moved to 14th in the motorcycle category.

This marks the end of the first part of the two-day marathon stage. The final two days of the rally will see riders heading back to Erfoud.