It was a day full of action at the Madras Motorsport Race Track in Chennai as the second round of the MRF MMSC FMSCI Indian National Motorcycle Championship got underway on Friday, July 7, 2017. 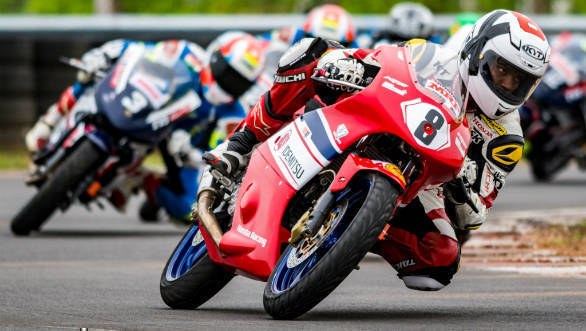 The first race of the weekend, in the Super Sports 165cc category were pretty intense as the riders were fighting tooth and nail for positions. Team Honda Ten10 Racing rider Rajiv Sethu made a superb start as the lights went out and managed to hold the lead, going into the first set of corners at the challenging MMRT circuit. Over the next couple of laps, he did come under immense pressure from the TVS riders. K Y Ahmed made a few attempts at snatching the lead from Sethu, but the Honda rider defended his position brilliantly. A few laps later, Sethu stretched his lead by quite a margin and won the race, clocking a total time of 12:02:236 minutes.

Honda continued to dominate in the Pro Stock 165cc category too, as Chennai lad, B Arvind secured top honors. He completed the race in 12:50.292 minutes.

Next up, the TVS Girls Race was a nail biter, right from the start. Almost half the field wheelied the TVS Apache RTR 200 race bikes as the lights went out, but that allowed last round's winner Aishwarya Pissay to build a big lead from the first corner itself. As the race progressed she looked comfortable and began to pull away from the field. However, Soundari A was in class of her own as she set about chasing Aishwarya, setting the stage for an epic battle. Towards the final few laps, Aishwarya was finding it hard to keep Soundari at bay, with the duo engaged in a close battle for P1. At one time they were almost side by side going into the fast, Turn 1. In the end, Soundari managed to pip Aishwarya to the top spot on the podium. Priyamvada Saradhi finished in P3.

The action continues today as the second race in each of the categories will be held, along with the Honda CBR250R Open class and National Stock Championship races.