The 15th edition of the Maruti Suzuki Desert Storm concluded on Saturday with final results being declared at the finish in Jodhpur. On two wheels R Nataraj emerged overall winner of the Moto class, while Suresh Rana and Ashwin Naik successfully defended their Desert Storm title in the four wheeled Xtreme category. Since the start in Hanumangarh, the competition ran through 11 punishing stages travelling through the cities of Bikaner, Jaisalmer and Jodhpur and there were quite a few lead changes and twists in the tale to keep the racing exciting. All the drivers and riders we spoke to agreed that the 198km marathon SS7 and night stage were challenges they were looking forward to the most. Here's what transpired in the different classes over 5 days of rallying in the dunes of the mighty Thar Desert. 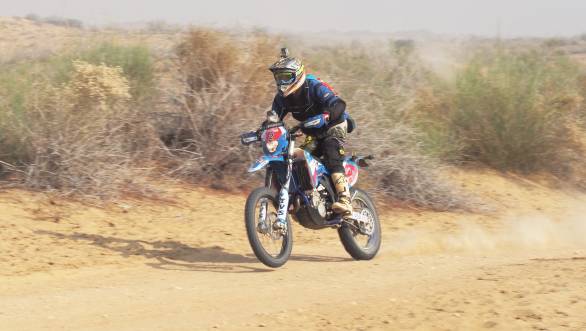 Moto Class
In the Moto category the clear favourite and defending champion was CS Santosh, fresh back from another completed Dakar campaign. And the Hero MotoCross Team Rally definitely looked the part too, standing out as one of the most professional service teams in the race, always seen working hard to keep the Speedbrain 450 in the best possible condition for the stages.

In the first few days CS Santosh predictably finished with the fastest stage times. Tanveer Abdul Wahid and R Nataraj were keeping him honest though, posting quick, comparative times through the tough stages. Then on SS6 CS Santosh had a big off, running wide and crashing through a fence. A crash so bad he was still feeling the effects of it days later. And even after that he managed to stay in the lead.

Tanveer was also was not without problems and on SS5 he lost a lot of time when the mousse from his rear tyre failed and he had to complete the stage with the rear tyre separated from the rim.

CS Santosh then received a 16 minute penalty on the marathon SS7 but still held on to a slender 42 second lead. One disappointment was the cancelling of the night stage for the Moto category due to unforeseen delays through the day and the following protests from some of the riders. The last day saw CS Santosh return to his speedy best, posting the fastest time through the last stage of the rally sealing his victory. Well, almost. On the finally drive to parc ferme and the official end to the rally, Santosh and his team checked in 30 minutes late handing the win to R Nataraj of TVS Racing. While this result was a bit of an anti climax, credit has to go to R Nataraj and Team TVS Racing for keeping in the fight and being in the position to capitalise on the mistake from Hero. 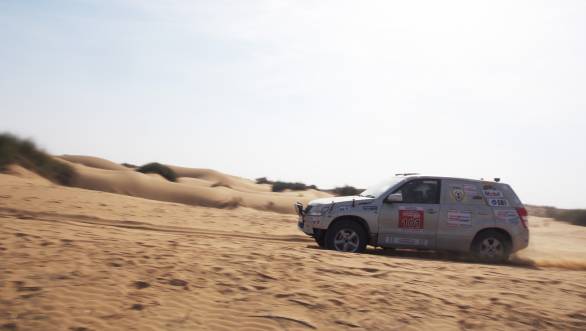 Xtreme
Suresh Rana and Ashwin Nair are a formidable team, having won multiple Raid de Himalayas and Desert Storm titles together and they were clear favourites for the win in the Xtreme category. But Rana was the first to admit that the entry list promised some strong competition for 2017.

Rana proved his mettle on the first day with fastest times in two of the first three stages but on day two they made a calculation error and they checked into a stage 8 minutes early. The 16 minute penalty meant that the defending champ dropped down to third overall. The marathon stage was where Rana showed his mettle passing the first two cars in the first 70 kilometres after starting third on the road, putting the pressure back on Sanjay Agarwal and Shivaprakash C. This tactic worked and the first thing to crack was Sanjay's Grand Vitara rear differential, which broke about 75km into the stage and he didn't finish SS7. Post that Rana maintained his lead comfortably over the rest of the field on the remaining legs. He even dropped pace to preserve the car and despite some scary moments in the final stage where they had to keep topping up engine oil along the way, Suresh and Ashwin managed to bring the Grand Vitara to the finish line.

Ndure and Xplore
The Ndure and Xplore categories are designed to be much more accessible to new competitors to the sport and this year there were a number of first timers in both the categories. The Ndure category featured entries from 4x4 vehicles with little or no modifications competing on the same stages as the extreme categories while the Xplore category was for all types of two wheel driven cars and featured a number of hatchbacks and sedans. This class too saw some challenging routes as the two wheel driven cars also did have some sections through the sands of Rajasthan. In the Ndure category, Nikunj Toshniwal and co-driver Suvrajit Dutta took the win, while Karthick Maruthi and S Sankar Anand took home the trophy in the Xplore category.

Just like the dunes of Rajasthan there were many ups and downs, lows and highs and it was a great experience following the rally though picturesque Rajasthan. The dominance of Suresh Rana and Ashwin Nair was truly a delight to watch and even though we weren't able to witness CS Santosh defend his title, new winners and entries means that there is great depth of talent in the class and we cant wait to see what happens next year.

Mobil 1 was the official lubricant partner for the 2017 Maruti Suzuki Desert Storm.