The penultimate round of the 2017 JK Tyre National Racing Championship concluded today at the Kari Motor Speedway, hosting two races each of the LGB F4, Euro JK 17 and Gixxer Cup championships. Leading the Euro JK 17 Championship after this round, is Anindith Reddy after securing two wins and one podium finish. Reddy started the first race of the day on pole while Vishnu Prasad and Akash Gowda started from P2 and P3. Reddy managed to hold the lead from start to finish while Prasad was right behind him to take second. Gowda fell behind as Ricky Capo made his way up from P5 to finish third. The second Euro JK 17 race started on a reverse grid of six with Vikash Anand on pole. Anand made a jump start, but despite that, fell behind and soon Vishnu Prasad, was leading the race with Gowda behind him. Reddy steadily made his way up from P6 to finally finish second behind Prasad, while Gowda tool third. Reddy leads the championship with 96 points while Prasad is 14 points behind him. 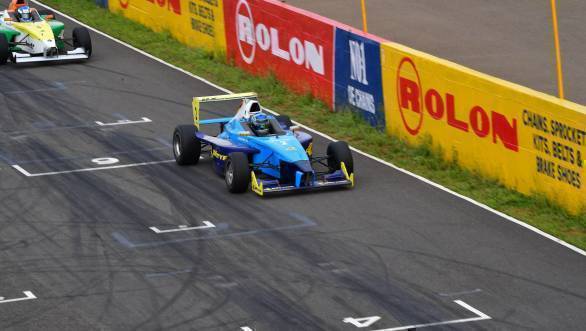 In the LGB F4 races Diljith TS managed score a double win today making full use of the reverse grid in the first race. With a good start he managed to hold off competition Raghul Rangasamy who finished second ahead of Sandeep Kumar. In the second race, Diljith started on pole again but was in a close battle with Rangasamy and then soon Vishnu Prasad and Rohit Khanna. Rangaswamy then spun out and fell to fifth, but was able to make his way back to third by the end of the race to finish behind Kumar. Chittesh Mandody, who managed a fourth and fifth place finish in the two races leads the championship with 61 points -- 8 points ahead of Prasad.