Round 3 of the 2017 JK Tyre National Racing Championship began today at the Kari Motor Speedway in Coimbatore. This round hosts four championships - the Euro JK 17, LGB F4, Gixxer Cup and Red Bull Road to Rookies Cup, and Day 1 held five races in all.

Two races were held today as a part of Euro JK 17 Championship, and guest driver, Ricky Capo from Australia, won the first one. Although Anindith Reddy crossed the line second, he was given a 10sec penalty for overtaking under a yellow flag,which pushed him down to fifth. This pushed Akash Gowda to second while Nayan Chatterjee took third. In Race 2, which started on a reverse grid of six, Nirmal Shankar started on pole what Reddy started from P2. However, Reddy started the race from outside the box. Aware of this, he took the lead in the first lap and pulled a 15 second lead by the end of the race. As a result, the 10sec penalty given to him for a false start, didn't affect his position. Finishing in second place was Akash Gowda while Ashwin Datta took third. This puts Reddy in the lead of the championship while his main rival this season, Vishnu Prasad, didnt finish either of the races. 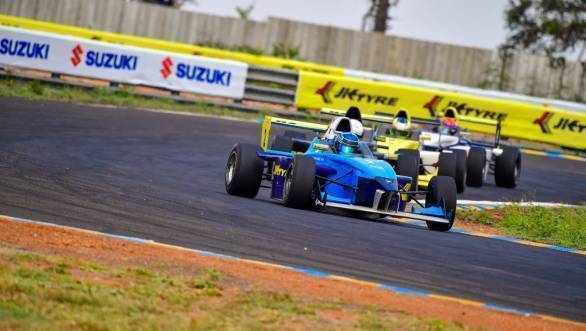 In the LGB F4 Championship, Prasad was tied for the lead with Chittesh Mandody after Round 2. Mandody qualified on pole for the race that was held today while Diljith TS and Vishnu Prasad took P2 and P3. There was a close fight for the lead between the three of them before Diljith fell back. Rohit Khanna, who was in fourth made his move and took second, pushing Prasad back one place. While there was a very close fight between the two, it was Khanna who finished behind Mandody to take second.