2017 India Baja to begin on April 7 in Jaisalmer

The 2017 edition of the India Baja will be held from April 7-9 in Jaisalmer, Rajasthan. This is the second edition of the event, and this year it will be a Dakar Challenge event. The India Baja is one of three Dakar Challenges held in the world, with the other two being the Sonora Rally in South Africa and the Afriquia Merzouga Rally in Morocco. What this means is that the winner of the event will get a free entry into the 2017 Merzouga Rally and the 2018 Dakar Rally. However, only competitors in the motorcycle class are eligible for this prize because, as the organisers said, "a privateer in a car will not have the bandwidth to go there," due to the lack of a suitable vehicle and equipment. The winner of the four-wheeler category will however, get a free entry into the 2018 Maruti Suzuki Desert Storm. 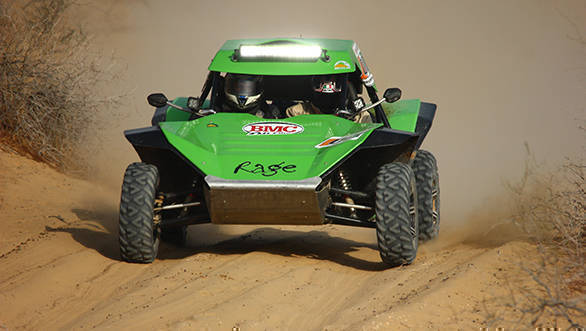 The Rage buggy, which will be competing in this year's event

Unlike last year's event, the India Baja 2017 will be held over two days instead of one. There will be six competitive stages covering a total of 430km, while the entire rally, which includes transport stages, covers over 600km. These stages will be held in a cloverleaf fashion around Jaisalmer for better logistics. This edition of the India Baja will see over 100 competitors participating, which includes international competitors like Adrien Metge and Joaquim Rodriguez, both of whom competed at the 2017 Dakar Rally. Metge, who is racing for TVS Racing, will be joined by teammates Aravind KP, R Nataraj and Abdul Wahid Tanveer. Rodriquez will race for Hero Motorsports Team Rally while his teammate from the 2017 Dakar Rally, CS Santosh, will sit this one out to recover from an injury.

We'll be at the event, so watch our website and our social media feed this weekend for the latest updates from the rally.