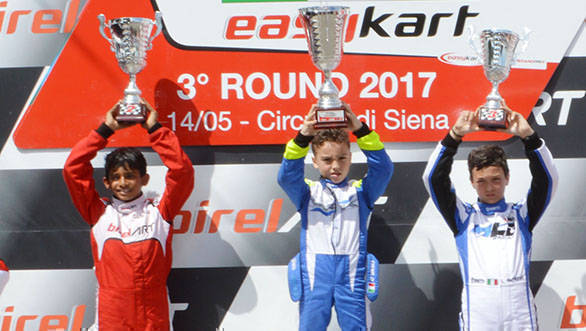 Ruhaan Alva, who has been racing for MLG Racing in the 2017 Easykart Championship in Italy, finished second in the third round of the event. Alva had a disappointing run in the heats, where he qualified fifth for the semi-final race. However, he won that race, leading eight of the 11 laps, which scored him enough points to start second on the 23-kart grid in the final race. Alva managed to take the lead in the final race by the second lap and held on to it despite tough competition from Andrea Pirovano and teammate, Lorenzo Patrese. The three of them were bunched up pretty tightly before Alva was pushed wide in a corner on Lap 12, which cost him his victory.

However, this podium finish moved Alva up to fourth in the overall standings of the 60 Easykart class with 48 points. This, despite missing the first round in which he competed in the 60 Mini class, before opting to compete in the higher class. The fourth round of the 2017 Easykart Championship will be held from June 10-11 in Lonato, Italy.