2017 Continental Supersports is the fastest Bentley ever made

Whenever luxurious and exotic cars are discussed, Bentley has always been featured as one of the prominent names. But the British automobile company does not want to limit itself to only making luxury cocoons. In a recent announcement, Bentley states that the Continental Supersports is the fastest four-seat car in the world. It has a claimed 0 to 100kmph acceleration of 3.5 seconds and a maximum speed of 336kmph. 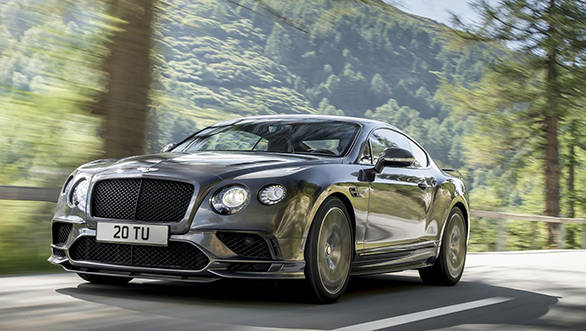 Under than snazzy-looking bodywork of the Bentley Continental Supersports resides a W12 engine that puts out an insane 710PS and 1,017 Nm. This has been achieved by the addition of higher-capacity turbochargers, new torque converter and a revised intercooler system. This has been further aided with the upgraded cranktrain and new conrod bearings. The new iteration too retains the rear-biased torque split of Bentley's all-wheel-drive system, sending 60 per cent of the engine's power to the rear wheels as standard. The performance tweaks have been done on the 2009 Supersports model that increased the power output by 80PS and torque rating by 217Nm. The company also claims that the power-to-weight ratio has been increased by 10 per cent while the torque-to-weight ratio has been improved by 25 per cent. The has resulted to a rise in top speed by 8kmph while the 0 to 100kmph timing has been reduced by 0.3 seconds. 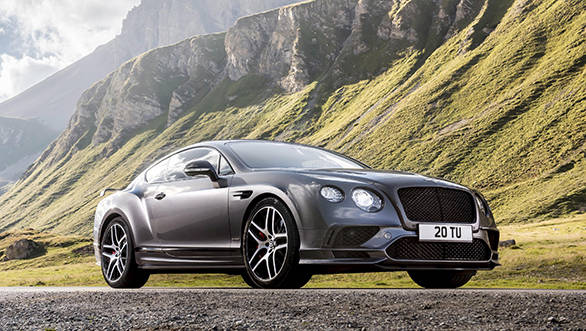 Doing the braking duties are the new carbon ceramic brakes with enhanced cooling. The supercar comes with a 420mm front and 356mm rear brakes, which are the largest compared to any other car. The company mentions that new brakes paired with the 21-inch wheels have dropped the overall weight by 20kg. And a further 5kg can be reduced by opting for the titanium exhaust system.

In terms of design, the 2017 Bentley Continental Supersports gets a more sculpted front and rear bumper designs that now feature a carbon-fibre splitter and diffuser respectively. The new side sill extensions and bonnet vents are also finished in carbon fibre. The front wing vents are finished in gloss black while the tailpipe design too has been changed. It seems Bentley wanted to bring in a more dark theme to the overall design as there is a dark tint on the headlights, tail lights and front grille as well as dark accents on the rear bumper, door handles and the window surrounds. Bentley will also offer an optional rear spoiler and front splitter combination for the coupe with new Supersports badging and a new black and bright-machined finish for the 21-inch forged alloy wheels. 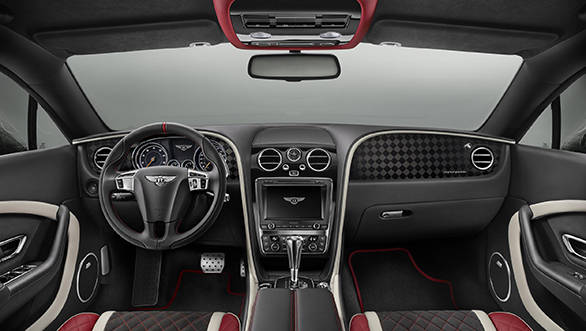 The exquisite exterior of the 2017 Bentley Continental Supersports has been carried inside as well. There is a new diamond-quilted design in the seats and door-side panels finished in Alcantara leather. There is a chequered Supersports carbon-fibre finished dashboard fascia. To make it look even more special than the previous offering, there is the new Supersports emblem stitching with a bespoke Supersports steering wheel and unique gearlever, both featuring Alcantara detailing.

And just in case all of the above seem to general and you still want to further customise your Continental Supersports, Bentley will offer a X-Specification pack that consists of eight unique dual-tone paint treatments and carbon-fibre door mirrors and heel plates. This will come with titanium exhaust and carbon-fibre finished interior side panels and a carbon-fibre engine cover as standard.