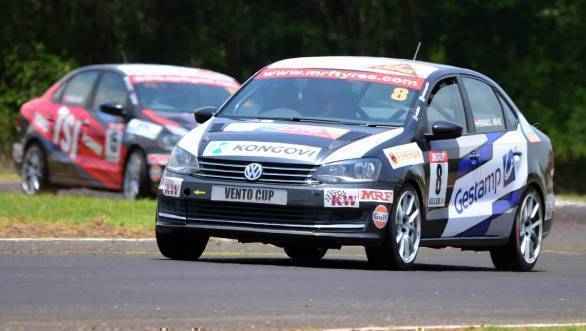 The 2016 Volkswagen Vento Cup has had three action pack rounds so far, and as it heads into the season finale at the Buddh International Circuit (BIC), things look like they'll get even more nail-biting.

While the switch to the Buddh International Circuit is not easy for some drivers to make, as they aren't familiar with the track, Volkswagen Motorsport India has arranged for a test session at the circuit on September 28, just ahead of the finale.

Heading into the final round as the championship leader, Dodhiwala had this to say:
"It feels good to come back to BIC for the final round and the fact that I have raced here before gives me confidence to take on the pressures that come with the season finale. This is the time to put in my 100% and translate this lead into an overall victory."

Meanwhile, Singh, who has narrowly lost out on the title in the past said, "Even though I am 34 points behind Ishaan, I am hopeful of making a strong comeback in the final round. It is important for me to stay consistent and keep a steady pace. Qualifying will be very important  a good position on the grid will definitely help me in getting an upper hand in the final round. And of course, Delhi is my home ground and it is always been a special track to win at!"