Jehan Daruvala, from Sahara Force India Academy, took his first Formula car victory in the Toyota Racing Series last weekend. He won the Lady Wigram Trophy after he won Race 3 at the Ruapuna Park circuit in New Zealand. However, the race weekend didn't start with as many smiles for Daruvala. With a slow practice run and some electrical issues with his car, Jehan went into Qualifying 1 and managed to finish eighth. The second session was even worse as Jehan decided to stay on wet tyres on a quickly drying track. While he did manage to set the fastest time when the track was still damp, he was pushed all the way back when it dried, to finally qualify fifteenth. The first race of the weekend saw Jehan have a fairly good race as he made his way up to finish eighth. Race 2, which started on a reverse grid, saw Jehan on pole. But with quite a horrendous start, he was pushed back eight places. Things didn't get any better as he was rear-ended under a yellow flag that sent him further back to sixteenth. However, he did manage to get to thirteenth before the chequered flag.

Race 3 started under damp conditions, with all the drivers on slicks. By the time Jehan gained a few positions, the drizzle had gotten worse, and his team mate Pedro Piquet pitted to swap his slicks for wet tyres. Seeing Piquet's lap times improve, the team called Jehan in for a tyre swap as well. By the time he was out of the pit lane, race leader Lando Norris had lapped him. With wet tyres on, Jehan was back in the game, as he first got past Norris and then continued to overtake the others. 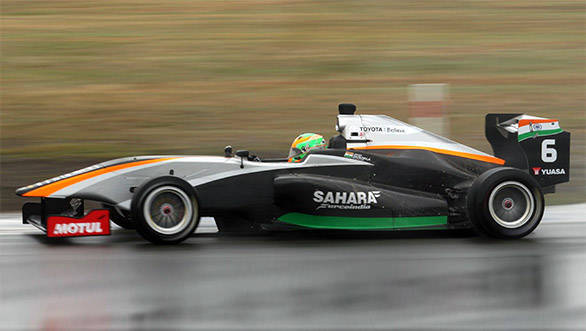 "My first two races were not ideal. Race 3 was really enjoyable. I really have to thank the team for making the right decision of putting me onto wet tyres at the right time. The Safety Car helped me close in the gap and from then on I just had to make sure I made no mistake. I am very happy to have finally won my first race. I really need to thank the Sahara Force India Academy for their continued support. Going forward, I still need to gain some pace and also work on my race starts," said Jehan.

Jehan's next race will be held this weekend at the Teretonga Park Raceway in New Zealand.