To start with, Toyota has refreshed the face. It looks similar to the Brazilian Etios that was unveiled a few months ago. There are sharp cuts and creases, and this in turn lends the new Toyota Etios Platinum with an aggressive stance. The lower bumper is more pronounced now. The alloy wheels on the top trims also look trendy. 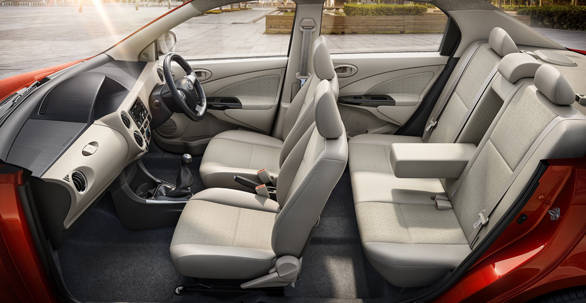 Inside, there is the centrally mounted instrument cluster with a Bluetooth-enabled touchscreen system sitting below it. There are audio controls on the steering wheel too. Toyota has also revised the upholstery with a new ivory colour. The rear seat can now be dropped to accommodate longer objects in the boot. Toyota claims to have improved the NVH by as much as seven per cent in the new Etios range.

The 1.5-litre petrol engine and the 1.4-litre diesel engine remain unchanged and are mated to a 5-speed manual transmission. Toyota did toy with the idea of an automatic, more notably an AMT, but ditched it because the company found the transmission to be less reliable and heavy maintenance. Bringing in a CVT or torque convertor will have escalated the costs. The Japanese carmaker, however, hasn't ruled out an automatic for the Etios range. Toyota claims to have worked on the clutch to make it less springy for the Etios Platinum series.

While dual airbags were standard across both the cars from 2014, Toyota has upped the safety quotient by making ABS standard. ISOFIX points too have been added to improve child crash safety protection. While many customers had initially complained about the fully loaded cars beaching on high-speed breakers, Toyota says this has been taken care off by retuning the suspension.