The 2016 Force Gurkha Rainforest Challenge India's Predator leg was held at Quepem (Cavorem) in South Goa. Unlike the first Prologue leg, which was further divided into 12 stages and held over Day 2 and Day 3, the Predator leg has been divided into just six stages. Every single stage of the Predator leg turned out to be significantly tougher and more challenging than those of the Prologue leg. Each one of them was also spread over a longer distance compared to the first leg.

The Predator leg not only ended up testing the endurance level of the competitors but also ended up damaging quite a few vehicles. Some competitors toppled their vehicles and quite a few teams were unable to complete some of the stages within the stipulated time limit. As a result, the number of teams with a DNF (Did Not Finish) was much higher than the first leg.

Most of the marshals and teams I spoke too, commented that the real Rainforest Challenge begins with the Predator leg and they consider the Prologue leg to be something of a warm-up. If that's the case then I can totally imagine the how complex and challenging the remaining two stages will be. As the pictures suggest, the going seems to be getting only tougher from here on.

In the Predator leg, neither of the stages could be termed easy or less challenging as completing every single one was a tedious task. SS-13 was the shortest leg, but what made it difficult was that there was no muddy trail to drive on. Instead, the entire route was through a treacherous  path comprising rocks of different shapes and sizes. All teams had to manoeuvre through a downhill stretch and after making a u-turn at the base of the hill, drive up through the same section to reach the end point. Some teams were lucky to get away with a damaged tyre sidewall or bodywork while the unlucky ones ended up with a DNF. One team rolled multiple times in one section of the stage.

SS-14 was a similar to the Predator SS-13 stage, as teams had to drive down a hill and after making a u-turn at the base, drive to the top again. What made this stage difficult and more tedious was the nearly 70 degree descent and climb in one section. A few metres after that was a 40 degree incline that had to be tackled. Understandably, most teams had to rely on the winch to successfully tread across this one.

SS-15 required teams to literally drive through a stream which went up to two feet deep in some sections. According to the marshals manning the stage, the stretch through the stream was over two kilometres long overall. Some vehicles ended up coming in contact with the many big rocks that the deep water hid, which resulted in big damage.

SS-16 was one of the faster stages as the route was mostly a muddy trail going up a hill with a stream crossing in the middle. After getting to the top of the hill, teams had to make a u-turn and drive back to the point from where they started. Just after the start point was a rocky descent which required slow speeds and precise steering inputs to successfully negotiate it.

SS-17 was brutally challenging and many teams ended up with DNFs. It was a mix of multiple challenges. First up was a rocky surface with a steep drop which made it difficult to find traction. That was followed by a few hatchback-sized rocks and manoeuvring around them wasn't an option as the markers were placed close. So, teams had to drive over them and some teams, clearly more daunted than others, ended up calling it a day. Those who managed to get through had to then tread across a rocky trail, which led to a 40 degree descent and was followed by a 70 degree incline. Despite sticking to 4X4 low and relying on the winch, some of the less experienced teams were unable to get past the hurdle. I'm fairly certain that it was this stage that had the maximum DNFs.

SS-18 required teams to tread across what appeared to be the remains of an old fort. This one too made drivers and co-drivers sweat as it comprised of vertical two feet high climbs which required utilisation of bridging ladders, a 70 degree incline on a slushy trail,  steps and a seemingly impossible to conquer mud hill.

At the end of Day 4, four teams were yet to complete the Predator Leg so results weren't announced. Once all teams complete the second leg, the Terminator stage will be held on Day 5 of the 2016 Force Gurkha Rainforest Challenge India. 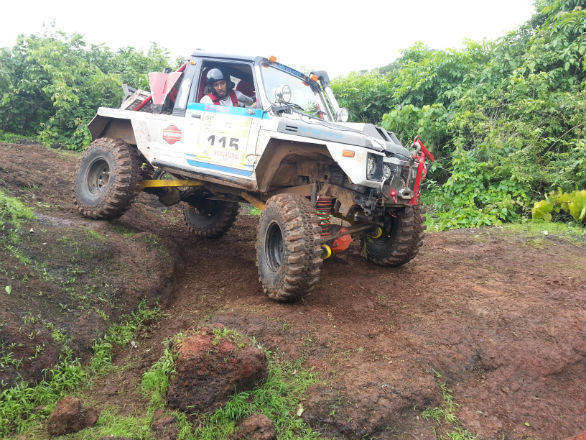 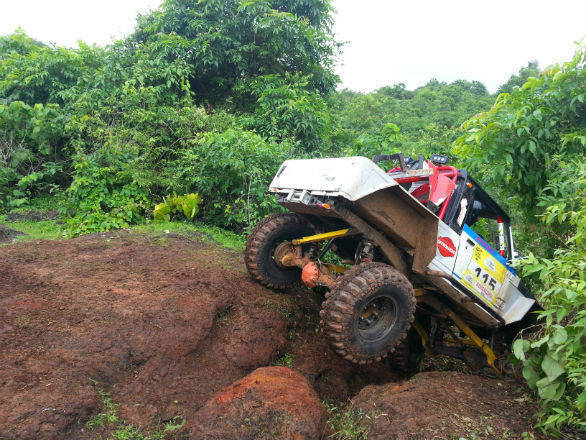 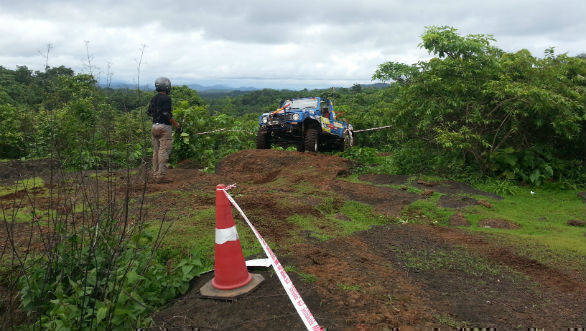 After making a u-turn at the base of the hill, teams had to drive up through the same section to reach the end point 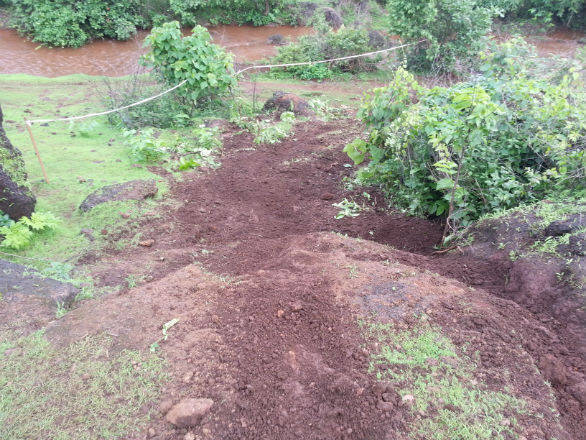 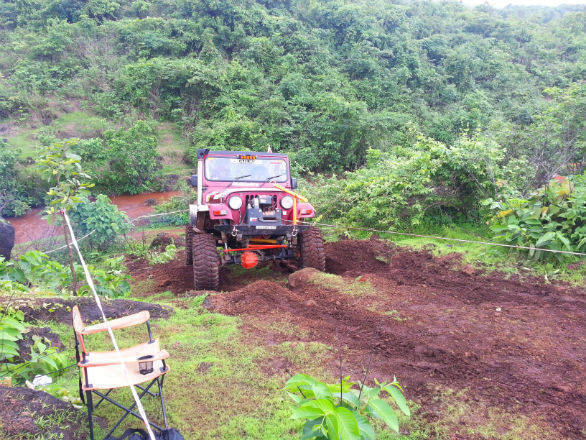 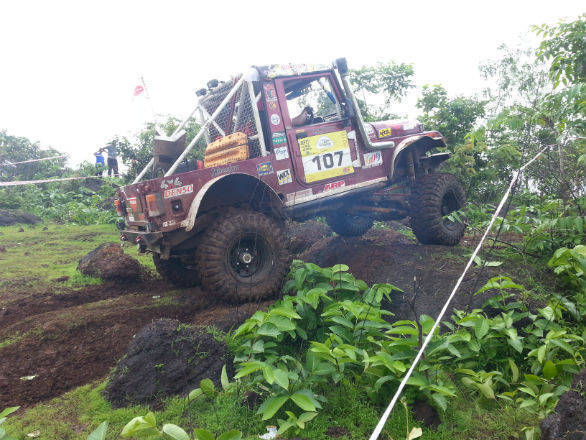 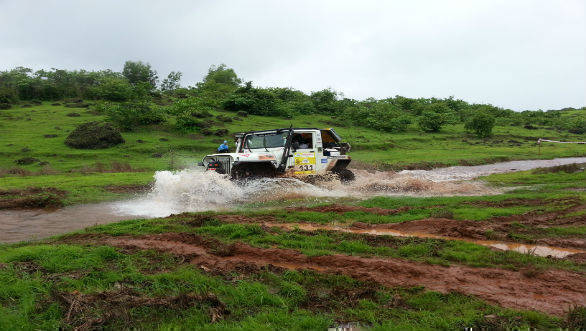 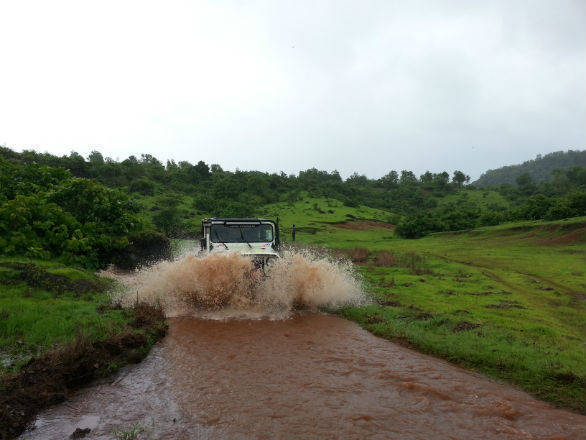 The stream's depth went up to two feet in some sections 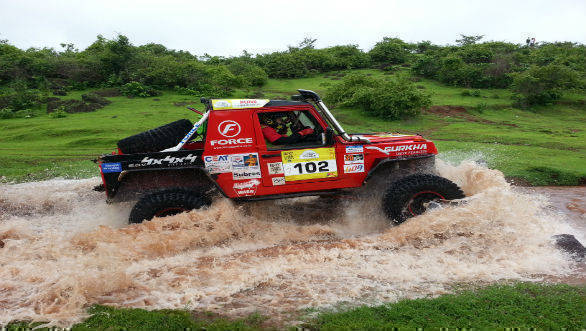 The stretch through the stream was over two kilometres long overall 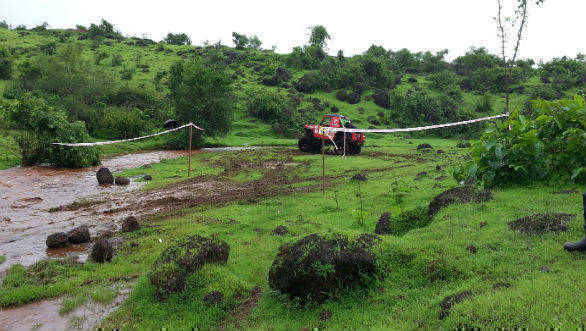 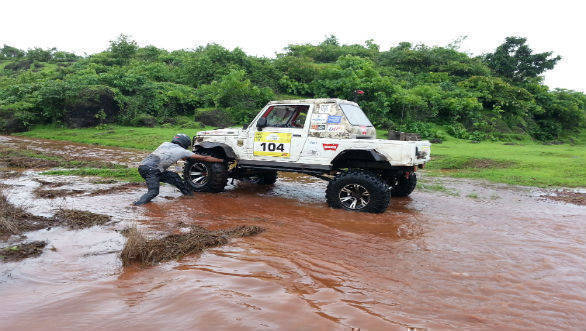 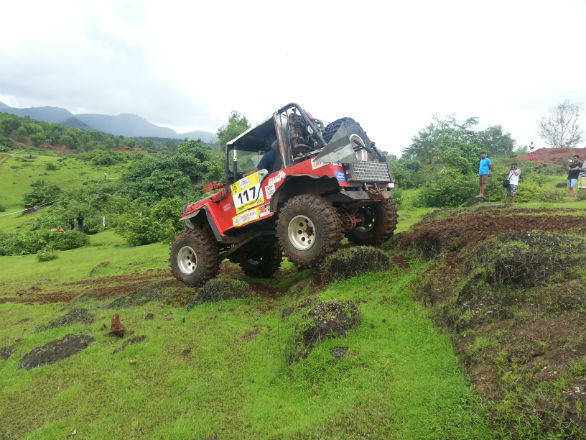 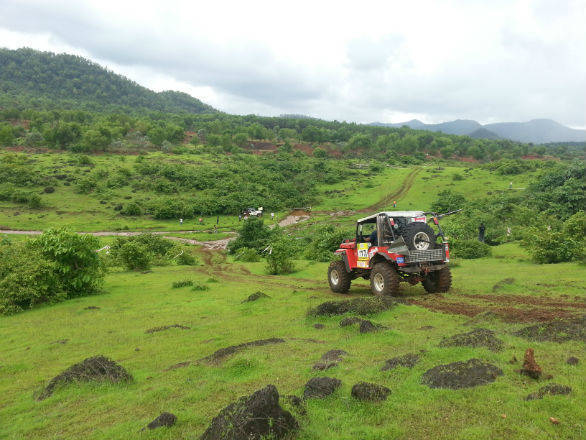 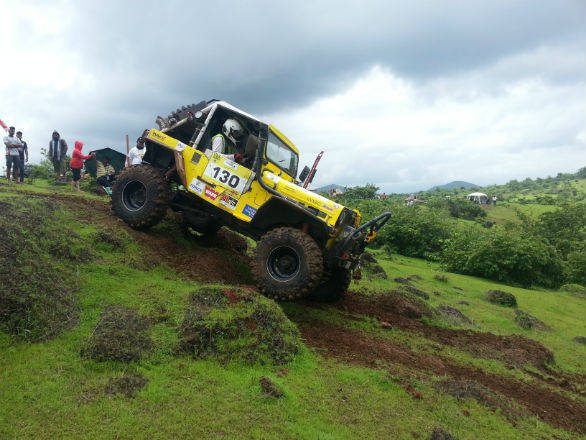 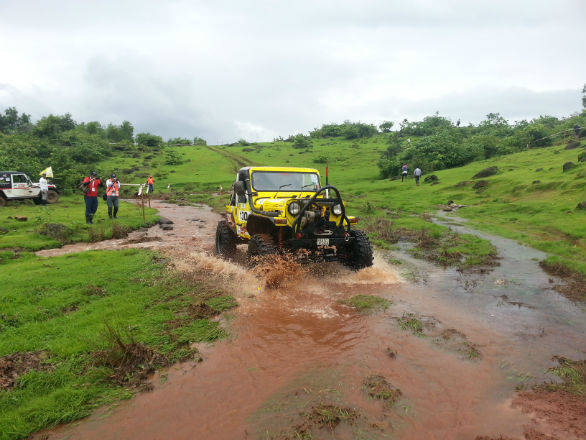 There was a stream crossing in the middle section of the stage, adding to the challenge of SS-15 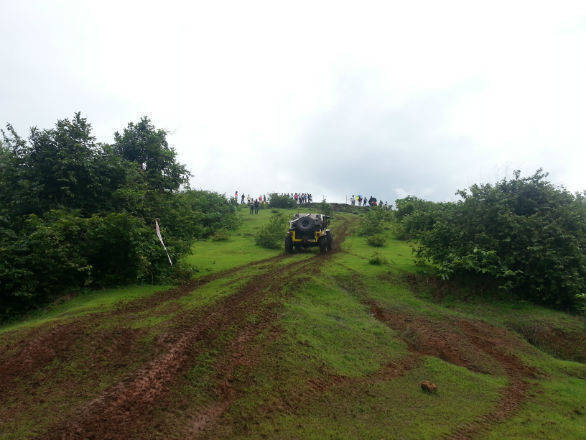 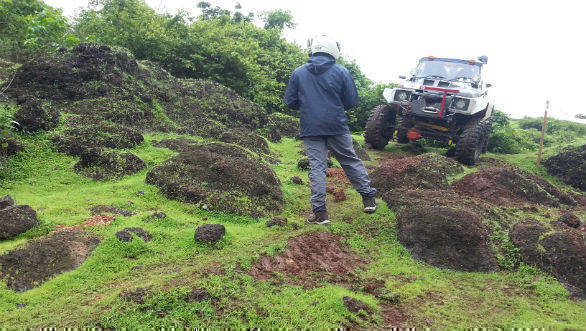 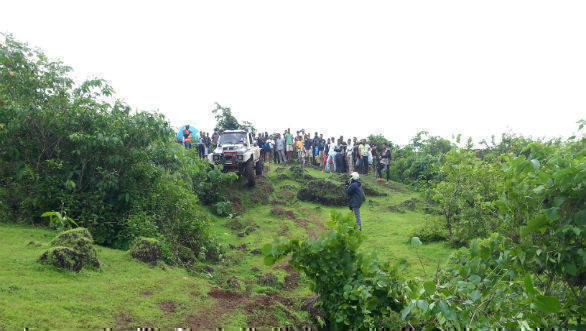 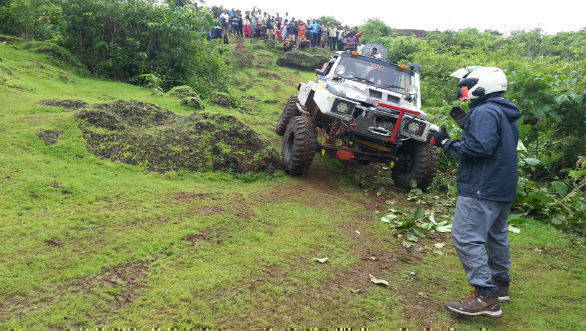 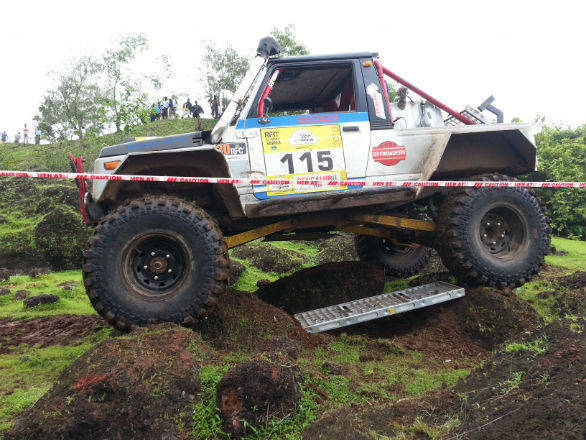 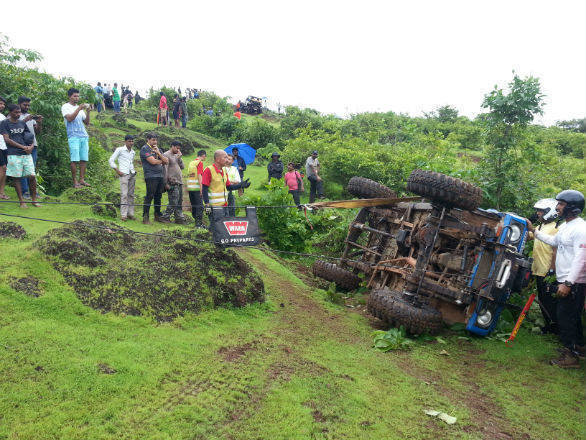 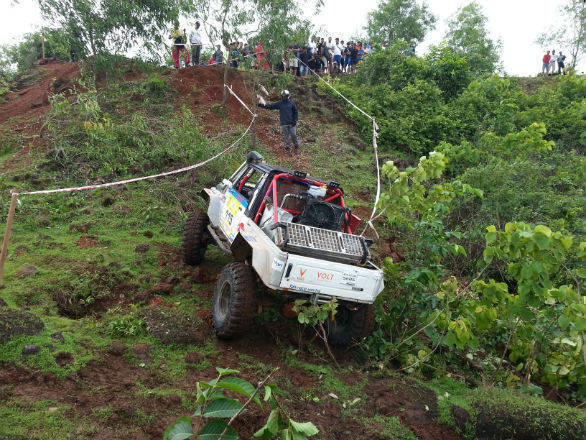 Despite sticking to 4X4 low and relying on the winch, some of the experienced teams were unable to get past 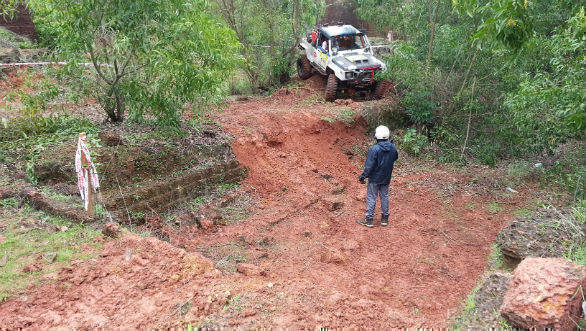 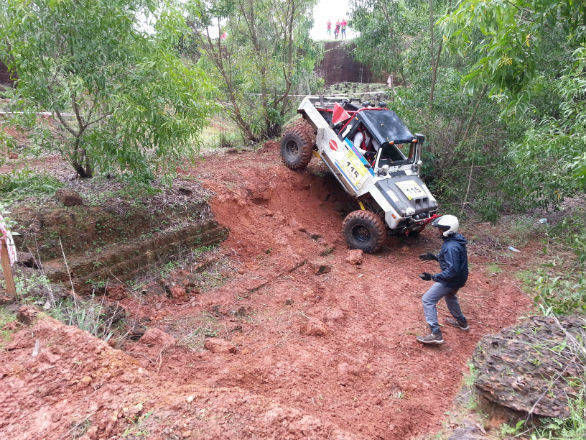 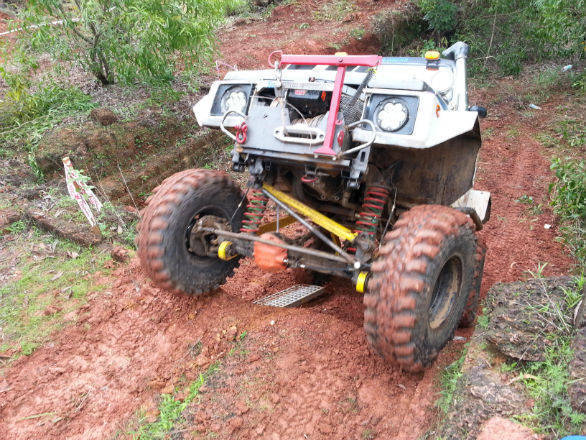 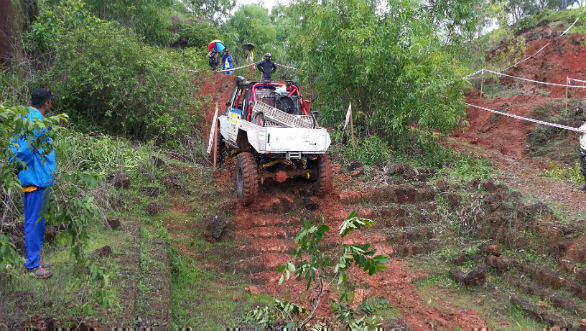 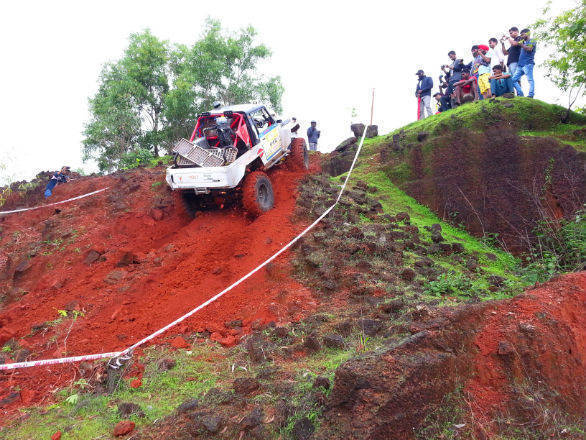