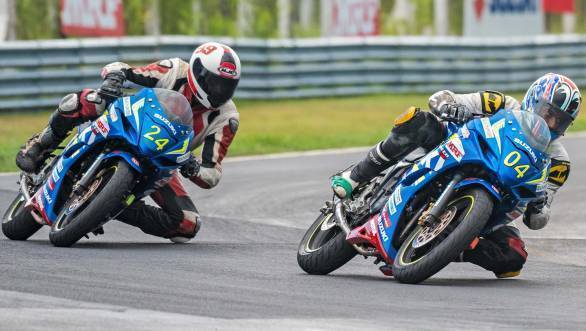 Meka Vidhuraj managed to take a fine victory in the Open class race of the Suzuki Gixxer Cup, at the third round of the MRF MMSC FMSCI Indian National Motorcycle Racing Championship.

Vidhuraj started the race fourth on the grid, but took the lead on the first lap of the race, but B Rajnikanth soon got the better of him. Vidhuraj displayed fine racecraft, and bided his time, and was particularly clever on the last three laps of the race, following the race leader in a cautious fashion. Then, on the very last lap of the race, he managed to make a smart move to get past Rajnikanth. This gave him his second win of five races.

In the TVS MMSC One Make Championship, it was Apex Racing's Yashas RL who won the Novice class ahead of Hari Prasath R and Kamran Alam.

Qualifying for the 165cc class saw Jagan Kumar take pole position. However, when the TVS Racing rider was disqualified on technical grounds, Rajini Krishnan of RACR was moved up to pole.