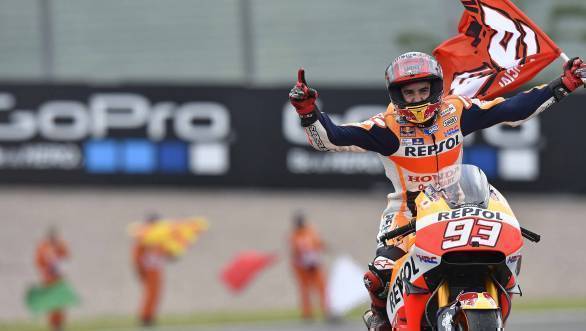 Marc Marquez won his seventh consecutive race at Sachsenring, despite an off-track excursion that meant he needed to swap bikes on the seventeenth lap of the race. This dropped the Repsol Honda rider down to fourteenth on track, but he blazed through the field and managed to win the race with a huge margin over second-placed Cal Crutchlow.

What lost the race for the likes of Valentino Rossi and third-place man Andrea Dovizioso. It was probably the fact that they changed to dry bikes too late in the race. For Rossi, things were even worse given that he chose Intermediates over slicks, a decision that would result in him ultimately finishing eighth.

Finishing the race fifth was Andrea Iannone, ahead of Marquez's Honda team-mate Dani Pedrosa. Seventh place went to Jack Miller, fresh from his win at the Assen MotoGP round.

Hector Barbera and Alvaro Bautista rounded off the top ten. While Jorge Lorenzo could do no better than 15th place, putting a sizeable dent in his championship hopes.