The MotoGP TT Assen turned out to be a surprisingly good race weekend for some and a bad one for others. Jack Miller (Estrella Galicia 0,0 Marc VDS), for instance, couldn't have asked for a better ending after taking his first MotoGP victory. Marc Marquez seemed to be content with taking second place and extending his lead over his rivals  Valentino Rossi and Jorge Lorenzo  who didn't have a very eventful race. 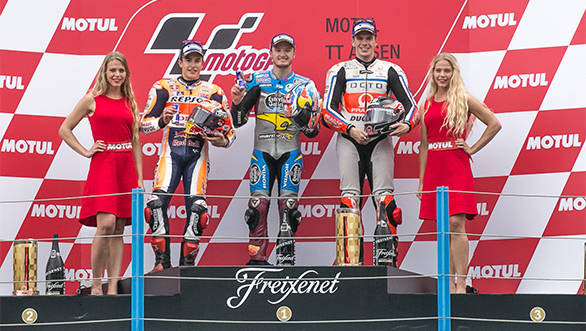 Before the race even started, the wet track promised to make it an interesting one. With the rain easing up, the riders lined up with Andrea Dovizioso (Ducati Team) on pole, followed by Rossi and Scott Redding (OCTO Pramac Yakhnich). When the lights went out, Rossi took the lead by C1 and managed to pull a one second lead over everyone except Dovizioso by Lap 1. However, soon after, Yonny Hernandez (Aspar Team MotoGP) managed to get past both of them, who decided to play it safe.

Just as the track started to dry and the riders considered switching tyres, it started to rain very heavily. Yonny Hernandez was out of the race after he fell, and soon it was a three-way battle for first place as Redding caught up with Rossi and Dovizioso. The conditions were only getting worse and with 12 laps to go, the race was red-flagged.

Once the conditions improved, the race was restarted with the starting position based on the results of Lap 14. Dovizioso was on pole followed by Danilo Petrucci and Rossi, while Redding, Marquez and Dani Pedrosa filled up the second row. Lorenzo, who had a terrible start in the first part of the race, was 19th the grid. Meanwhile Miller, who had started from 12th earlier, was now starting ninth from the grid.

When the race restarted, Dovizioso lost the front end and was out of the race, giving Rossi the lead. However, that didn't last too long as he crashed out at Turn 10 in the next lap, making it his third DNF this season. Marquez took the lead, while Miller had steadily made his way up the ladder to second place. On Lap 4, Miller took the lead on the final chicane and held it till the chequered flag. Miller's is the first rider in a non-factory team to win a race since Toni Elias in the 2006 Portuguese GP. He is also the first Australian to win a race since Casey Stoner's victory at Phillip Island in 2012.

Marquez, who could have fought for first place, played it safe and settled with the 20 points for second place. This increased his championship lead over Lorenzo by 24 points, and Rossi by 42 points. Third place was taken by Redding, after a close battle with Pol Espargaro who took fourth. Andrea Iannone took fifth, ahead of Hector Barbera (Avintia Racing) and Eugene Laverty (Aspar MotoGP). Completing the top 10 were Stefan Bradl (Aprilia Racing Team Gresini), Maverick Viñales (Team Suzuki Ecstar) and Jorge Lorenzo.