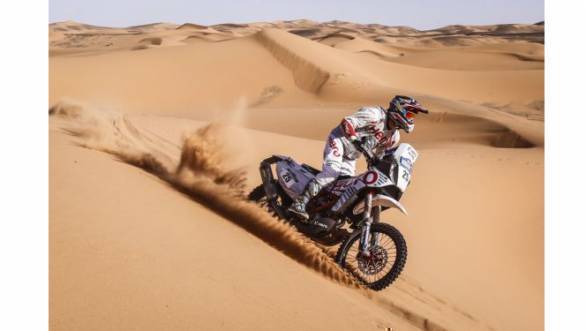 The first stage of the 2016 Afriquia Merzouga Rally was tough. The temperatures went well above the 40 degree celcious mark, and the dunes in Merzouga and Erg Chebbi threw plenty of challenges at the riders. Despite it all, the newly formed Hero MotoSports Team Rally and its riders CS Santosh and Joaquim Rodrigues managed to impress.

Rally novice Rodrigues managed to end the stage tenth, after staying out of trouble the whole way. "Today was my first rally stage", said the Portuguese rider. "I didn't make too many mistakes, just one at a checkpoint. It is really difficult with the navigation and it is pretty hot out here. I'm happy to finish the way I did, it was a good experience. Tomorrow I will try to avoid mistakes and then hopefully make progress throughout the week."

CS Santosh had somewhat of a tough day, owing to the fact that he was the rider who had to open the stage. Following some navigational issues, Santosh ended the stage 17th.

"I was a bit nervous opening the track. But the team told me to go ahead and be confident. I had a good feeling, then I started to make some small mistakes. I finally found someone who handled the navigation very well, that helped me and I brought it home. The rally is very, very tough. It deserves to be part of the Dakar series. You don't need a crystal ball to see that the next four days will be very challenging," said the Indian rider.

In the overall classification, Joaquim Rodrigues is currently ranked 11th, while Santosh is ranked 23rd.