Day Two of the second round of the 19th JK Tyre National Racing Championship was pretty action packed as the drivers looked to improve their position in the championship standings. 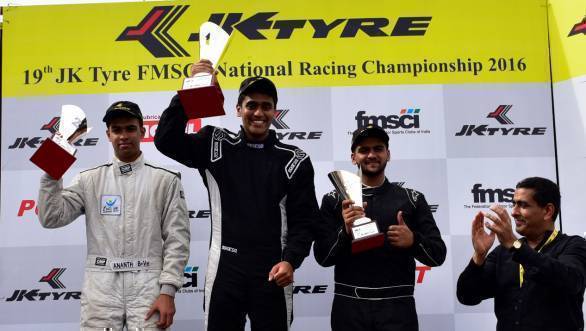 The Euro JK 16 Races were terrific with some hard fought battles among the field of drivers around the 2.1km Kari Motor Speedway. Nayan Chatterjee looked to improve on yesterday's performance after a few issues with the car saw him miss the top step of the podium. Those issues were sorted last night and he looked all set to dominate the field right from the day's first race. As the reverse grid was in effect, Nayan began in P4 but made it a point to make a good start. Within no time,  he was in the lead of the race and from then on,  there was no catching him. Ajay Kini tried hard  to keep up but couldn't match Nayan's pace. A few laps later an incident at C3 brought the red flags out. Karthik Tharani was involved in an accident, however,  he was completely ok. This did give the field a chance to catch up with Nayan. Ricky Donison,  who spun out and ended up at the back of the field was the biggest beneficiary.

Nayan, however, knew what to do and timed his getaway perfectly. A calm drive from him saw him clinch P1, with Ajay Kini in P2, and Ananth Shanmugam third. 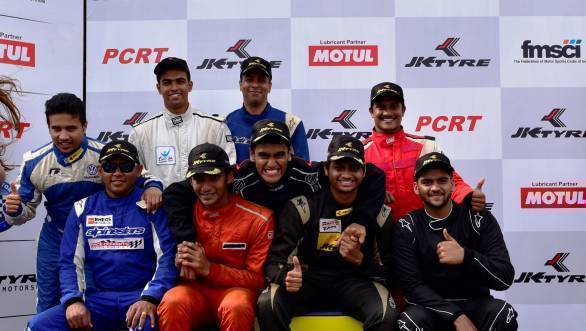 The second race in the Euro JK 16 class was even more spectacular with Nayan and Ananth engaged in an intense battle. Starting on pole Nayan shot off into the distance and with the field playing catch up. As the drivers neared C1,  Anindith Reddy, Ajay Kini and Karthik Tharani were involved in a minor incident that saw them go off track. Nayan made the most of the incident behind him and stretched his lead by a huge margin. After the first few laps, it seemed as if he had one hand firmly on the winners trophy. However, Ananth Shanmugam began gnawing away at Nayan's lead with each passing lap. With a little over six laps (out of 13) to go, Ananth was within striking distance. Nayan, again, kept his cool as Ananth kept piling on the pressure.

Ananth's car had suffered a minor blow to the front right wheel, during the first lap incident, which caused the alignment to go slightly off. This caused the car to understeer out of the last corner before the start finish straight. Thus, it was difficult for Ananth to get a good run on Nayan and try a late braking manoeuvre. On the last lap, and with a few corners to spare, Ananth tried one last time to get past Nayan. Unfortunately he suffered  a big lock up and lost the chance of outbreaking Nayan. At the finish line, Nayan took the chequered flag in P1 with Ananth in P2, separated by a mere 0.892 seconds. Dhruv Mohite crossed the line in P3. After Round Two, Nayan Chatterjee leads the Euro JK 16 Championship with 58 points. Ananth is second with 48 points, followed by Dhruv Mohite with 36 points

In the LGB Formula 4 category,  drivers lined up in the reverse grid order. As the lights went out, Vishnu Prasad began extending his lead. Meco Racing's Raghul Rangaswamy was engaged in a fight for P2 with  Dark Don Racing's Ashwin Sundar. The duo were involved in their battle that they did not realise when they'd caught up to Vishnu. Approaching the Kari Motor Speedway's tricky C1, C2 and C3 complex, Sundar hit Prasad. The race leader managed to control the car, but found himself in third. Ashwin and Raghul were now fighting for the lead, with a furious Vishnu in pursuit. Towards the end of the race, Ashwin managed to overtake Raghul and cross the line in P1. The drama, however, continued even after the flag. Vishnu was understandably angry and even the stewards deemed Ashwin's move as unfair and beyond the rules. He was thus handed  a ten second penalty, which saw him drop from fifth to fourth. Raghul Rangaswamy was classified the winner of the race, with Vishnu Prasad in P2 and Diljith TS from Avalanche Racing finishin in P3.

In the second race of the day,  Meco Racing's Vishnu Prasad made his intentions pretty clear as soon as the lights went out. Racing with an injured foot, Prasad had only one goal in mind - to finish on the top step of the podium. He quickly got past pole sitter and team-mate Raghul Rangaswamy around the the first set of corners. A few laps later, there was a small incident on the start-finish straight that brought out the red flag.  The race was restarted, with a rolling start, and Vishnu made good use of this. As the Safety Car came in, he judged the right moment to step on the throttle and run away into the distance. He eventually won the race with a comfortable 4.452 second-gap to Raghul Rangaswamy in P2. Rohit Khanna from Dark Don Racing finished third, two seconds after Raghul. After Round 2, Vishnu Prasad leads the LGB category of the series with 38 points in the bag.

In the JK Touring Car Race, Ashish Ramaswamy put up a spectacular defence to his lead position as Deepak Chinnapa tried everything possible to pass him. The duo were in a class of their own as the rest of the field was way behind. Deepak did manage to get alongside Ashish a few times on the start finish straight, however, Ashish managed to outbrake him always. He eventually won the race with Deepak in second and Rajaram C in third. Ashish leads the category.