RRPM, has also managed to get other brands like MRF Tyres, Mahindra Adventure, Polaris and Pincon to sponsor the INRC this year. 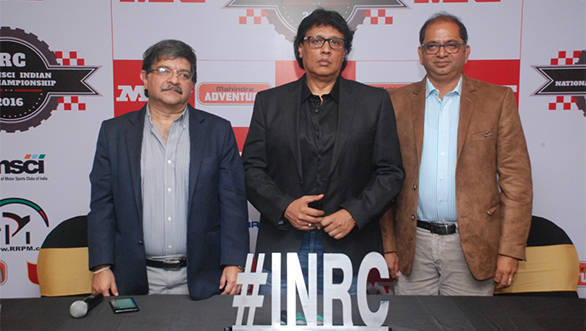 When asked about the FMSCI's progress this year with respect to rally championships, Zayn Khan, the president of the FMSCI, stated that the fact that the event has a promoter after three to four years is progress in itself. He also stated that around two years ago, the FMSCI spent over Rs 1 crore of their own money from their corpus to keep the INRC running. However they weren't able to produce anything at the end of the year which helped them publicise and attract a sponsor for the next year.

Khan also stated that in 2015, the FMSCI made a conscious effort to not subsidise the INRC, which according to him, was very scary as people thought it would come to an end. However, it managed to run on a shoestring budget. Although there were no initial bids initially for the INRC this year, RRPM came forward eventually with a bid. Although there are just five rounds and not seven, Khan stated that he was still very happy. "Even Delhi is on board now, and we haven't run an event in Delhi in at least 10 years, minimum. And then it ends in Chikmagalur at the APRC, so I think it's an ideal calendar for us," he said rather elated.

When asked about his future plans for rallying in India, Khan said, "I believe that it ultimately has to boil down to manufacturers homologating and participating in their cars. This is an area which we in India have not been able to convert to our advantage." He says that the problem is that manufacturers don't like to homologate their cars, which is something he doesn't understand. Khan has found that manufacturers will "pick and find their own journey into the sport" with each one taking a different course.

Ashwin Pandit, Rally Commission chairman, stated that other Asian countries like Sri Lanka, Thailand and Indonesia were facing a similar problem with manufacturers unwilling to homologate their cars. However, if the technical commission of the FMSCI approves of a solution that is in the works, manufacturers might not even have to homologate their vehicles to participate. This is a method that some of the other Asian countries have adopted, which seems to be working well. However, this still remains unclear for at least another two months according to Pandit.