Hyundai Motors has just unveiled the facelifted Santa Fe in Korea. The facelifted Hyundai Santa Fe is named the Santa Fe Prime and is likely to make its way down to the Indian market by the 2016 Auto Expo.

Changes on the outside include new bumpers with chrome outlines, daytime running LEDs, High Beam Assistance, LED guide lights for the new bi-xenon head lamps. While Hyundai has retained the side profile, the rear has been slightly reworked with dual quad exhausts and lamps with LED graphics on them. Overall, the car looks sportier than the outgoing version. 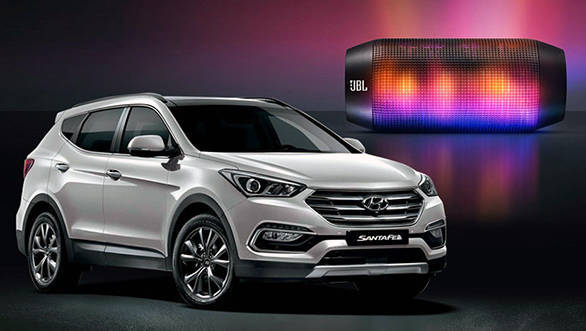 The basic layout is the same as the outgoing Santa Fe, however, but with a few added touches. For example the JBL surround music system, 360-degree camera and advanced cruise control. On the safety front, there is the autonomous braking system along with the usual four airbags and other electronic aids.

The 197PS 2.2-litre and 2.0-litre diesel engines continue to do duty in the Santa Fe but the India-spec version will only get the 2.2-litre motor. Hyundai claims that the response from these mills as well as driveability have been improved. The Santa Fe Prime can be optioned with a 6-speed manual or an automatic transmission.

The updated Hyundai Santa Fe will come to India via the CKD route. Expect prices to increase slightly though.