The 2016 season of the Honda One-make Championship is set to begin this weekend at the Kari Motor Speedway. There will be five rounds this season, three of which will be at the MMRT while the final one will be at the Buddh International Circuit. Honda has received 53 entries for this time from across the country. This season will also host an all-women race in the first round, where 10 riders, who have been trained at the Honda Ten10 Racing Academy, will compete.

As always, the Honda One-make championship is split into two categories  the CBR 250R class and the open CBR 150R class. In the first category, Honda will lease out 16 motorcycles to four teams which have registered with the FMSCI. The CBR 150R class will be an open category in which riders, who have trained with any riding school recognised by the MMSC, will be allowed to compete. 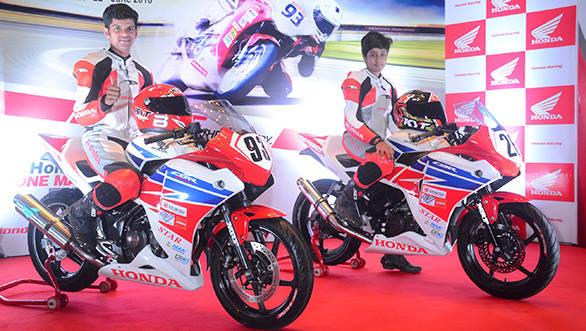 Honda has also announced the cities in which the Honda Ten 10 Racing Training Academy sessions will be held. There will be five sessions, from July to December, 2016. The month and city for these sessions can be found further down.

Another announcement from the brand is that the fifth round of the 2016 Asia Dream Cup will be held at the BIC from September 29 to October 2, 2016. Honda's Hari Krishnan and Sethu Rajiv are currently competing in the Asia Dream Cup. So far, Krishnan has bagged two podiums after three rounds.