Honda has launched the 2016 CBR150R in Indonesia. Present at the launch were Honda MotoGP Racing team riders Marc Marquez and Dani Pedrosa. The new motorcycle has been priced between IDR 32.5 million (Rs 1.65 lakh) and IDR 33.3 million (Rs 1.70 lakh). The top end version will be offered as a MotoGP edition with Repsol livery. 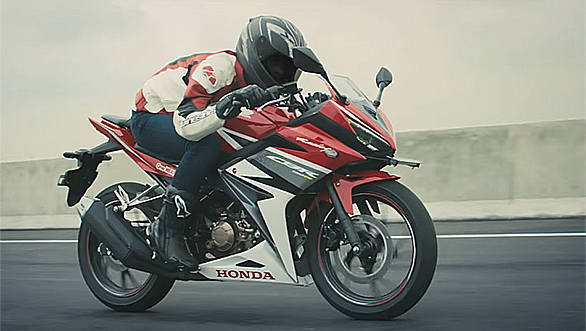 The new Honda CBR150R is visually different from the earlier model. The changes done on the new motorcycle give it a more aggressive stance now. The front fairing has been positioned lower. It now gets LED headlights and turn indicators, digital instrument cluster and split seats. The rear seat cowl is shorter and is placed taller than before. The length of the swingarm has been increased, and of the wheelbase too.

The 150cc liquid-cooled engine powering the new bike has been carried over from the earlier version. This motor makes 17.1PS at 9,000 rpm and generates 13.7Nm at 7,000 rpm and comes mated to a six-speed gearbox. More importantly, the new CBR150R gets a lighter chassis with a re-positioned engine that, Honda says, makes it a better handler than before.