Jaguar has officially announced that the new F-Type SVR will be showcased at the upcoming 2016 Geneva Motor Show. The Jaguar F-Type SVR will make its global debut at the Geneva Motor Show on March 1, 2016 and go on sale in international markets by the first half of this year. Jaguar has also released three images of the car which show it in both coupe and convertible forms.

The F-Type SVR is the first series production car to be developed by Jaguar Land Rover's Special Vehicle Operations Department. Jaguar says that the F-Type SVR is lighter, faster, more powerful and is capable of attaining a top speed of 321kmph. 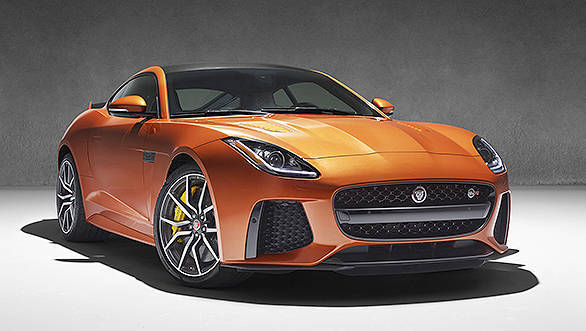 Before this official announcement, the F-Type SVR's brochure was leaked online. According to the leaked brochure, the Jaguar F-Type SVR gets powered by the same supercharged 5.0-litre V8 that also drives the F-Type R. However, the F-Type SVR's engine makes a higher 567PS of power and 700Nm of torque compared to the F-Type R's 542PS and 680Nm. The engine comes mated to an 8-speed automatic gearbox and power gets sent to all wheels. The F-Type SVR can accelerate from 0-100kmph in 3.7 seconds. Jaguar Land Rover Special Vehicle Operations is responsible for developing a range of high performance production models for both Jaguar and Land Rover, vehicle personalisation products and low volume, high value limited edition models for both brands. The new F-Type SVR will be sold alongside the 2017 F-Type Coupé and Convertible range comprising of the F-Type, F-Type S, F-Type British Design Edition and the F-Type R.