Sri Lankan racer Brayan Perera won the first season of the Formula Junior Racing Series, which concluded at the iconic Kari Motor  Speedway, Coimbatore on May 1, 2016. He topped the championship table with 72 points, after managing to win half of the scheduled 10 races, spread over two rounds.

Brayan won three of the five races in Round One and two in the second. Besides winning the championship, Brayan has also secured a sponsored drive in the JK Tyre FMSCI National Racing Championship, and will race for the Meco Racing Team. 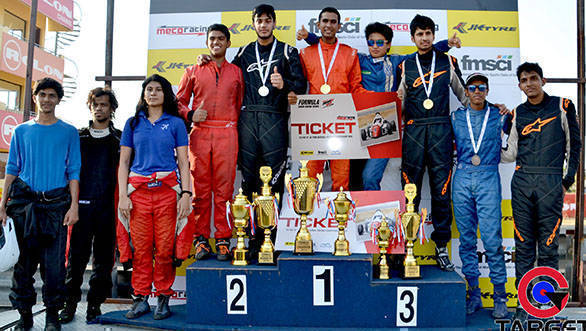 Second spot in the championship was bagged by Ashwin Datta, from Chennai, Tamil Nadu. He put up a brave fight for the top spot, winning three races. Sadly, his efforts were in vain as he could only manage to score 68 points, four short of the champion's. Alex Bora from Assam secured the third spot in the championship after scoring 53 points with two race wins. The drivers competed on an even playing field, as they all raced Formula LGB 1300 cars that belong to Meco Racing.

The Formula Junior Racing Series (FJRS) is promoted by Meco Motor Sports and serves as a stepping stone to drivers who've attended the Meco Racing Academy. The platform allows budding racers to graduate from Kart racing to Formula cars and helps them build their skill levels.

The event also witnessed support races in the form of motorcycle races, conducted across four classes 600cc, 300cc, 165cc Novice and 165cc Ladies. Faraz Shariff took top honours in the 600cc category, while Anthony Peter reigned supreme in the 300cc class. Aishwarya M won the ladies class. What's also amazing is that each of these winners won two races in the second round.

View the complete results below-