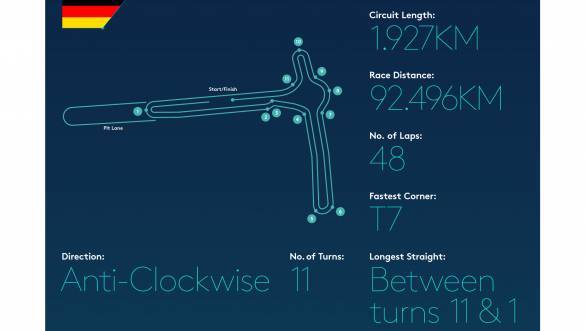 For the second season of Formula E, the Berlin ePrix features an all-new track. Gone is the Tempelhof circuit from last year, replaced instead by a track in the heart of the city. The pitlane runs down Karl Marx Allee, with Berlin's famous Fernsehturm or TV Tower in the background.

The track itself is 1.927km long, and runs in an anticlockwise direction. Of the eleven turns, T7 is the fastest corner. The longest straight is the start-finish straight, and the cars will run down this stretch a total of 48 times. Reigning Formula E champion Nelson Piquet Jr recommends that fans watch out for the hairpin bends, which will be tricky to get around.

In terms of the championship, the team currently in the lead is Renault e.Dams with a total of 165 points, while the ABT Schaeffler Audi Sport team is a close second with 158 points. Mahindra Racing is currently fifth, with 65 points.

The drivers championship sees ABT's Lucas diGrassi at the head of the order, with 126 points, followed by Renault's Sebastien Buemi.

With just two rounds to go, the championship is likely to go down to the wire.