2016 Auto Expo: Nissan to launch the X-Trail SUV in India

There have been lots of speculation regarding the launch of the new Nissan X-Trail SUV. While many reported that it will be launched in India in October, others said that the SUV isn't India-bound anytime soon. We however now have confirmed news that the Japanese company will be launching the X-Trail SUV in India at the 2016 Auto Expo.

The all-new Nissan X-Trail was first showcased at the Frankfurt Auto Show in 2013. The seven-seater SUV, called Rogue in the US, is built on Nissan's CMF platform and will be the company's first vehicle on the platform to come to the Indian market. The redi-Go or the Go Cross will be the second car to be spawned off this platform. The new Nissan X-Trail has a 76mm longer wheelbase and is 17mm longer than the older car. It is also wider than before. Nissan though have maintained the ride height at 210mm. 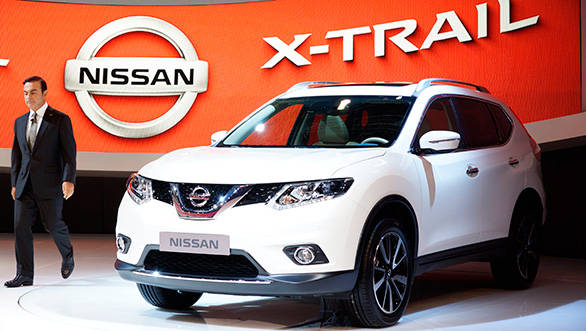 On the outside, the car now has a more rounded design as opposed to the boxy theme that the outgoing model had. The headlamp assembly includes LED DRLs along with projector lamps, the grille has a V-shaped chrome bar on it. The side looks nearly similar to that of the old X-Trail, however the 19-inch alloys are new. At the rear, the lamps are wraparound and just above the number plate holder is a chrome strip too. There are many changes inside the cabin as well including new upholstery, a swoopier design for the dashboard, a new NissanConnect infotainment system and a 7" colour touch screen, climate control, panoramic sunroof and rear AC vents. Active Ride Control, Advance Hill Descent Control and Uphill Start Support are some of the new driver aids added to the Nissan X-Trail's kitty. On the engine front, the new Nissan X-Trail is expected to come with a 1.6-litre diesel motor which makes 130PS of power and 320Nm of torque. Globally while it is mated to a 6-speed manual and Xtronic CVT, in India, expect Nissan to bring in the higher-spec CVT. The manual can exclusively be specced with a 4WD as well. Nissan claims that the X-Trail with a CVT can do the 0-100kmph run in just 11.4 seconds and achieve a top speed of 180kmph. Nissan India had discontinued the X-Trail SUV in India after sales failed to take off as expected. The X-Trail was the first Nissan product to be launched in India when the company started their operations in 2005. Expect Nissan to bring in the new X-Trail via the CBU route. It will compete with the Hyundai Santa Fe and Honda CR-V