Isuzu India has unveiled the new D-Max V-Cross pick-up at the 2016 Auto Expo. Billed as an Adventure Utility Vehicle, it is essentially a D-Max that can be registered as a personal vehicle. The Isuzu D-Max V-Cross 4x4 is likely to be priced at Rs 15 lakh (ex-Chennai). 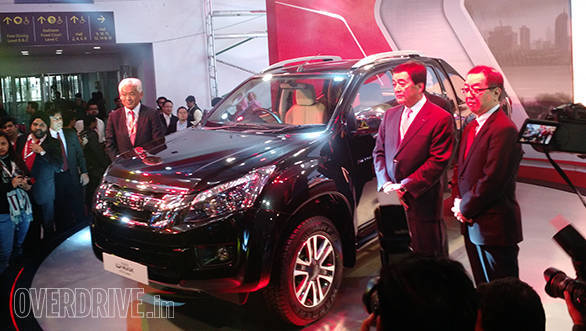 The pick-up comes with a new 2.5-litre, 136PS engine that develops 320Nm@ 1800-2800rpm. It gets a shift on the fly 4WD system. Isuzu says that the chassis frame is designed using its iGRIP (Isuzu Gravity Response Intelligent Programme) which keeps body roll in check when driving around tight bends.

Design wise, it looks like the standard D-Max but the distinguishing bits include a beefed up exterior, higher ground clearance, 16-inch alloy wheels, roof rails, chrome finished front grille, ORVM and door handle . The front end is sleeker than the previous D-Max series.

Isuzu also says that the open deck presents greater load carrying capacity than an SUV. The company says that the prices that are announced at Auto Expo 2016 are subject to change and will be finalised when bookings are announced.

The new D-Max V-Cross will be produced at the Isuzu's new factory at Sri City in Andhra Pradesh. The company is also in the process of ramping up its production. The Isuzu D-Max also comes in a 4x2 trim but this is strictly for commercial purposes only. It looses out on a few features, like the touchscreen infotainment system and alloy wheels. Expect this version to bear a price tag, between 8.5 lakh to 9.5 lakh (ex-Chennai).

Isuzu India marketing and communications head, Shankar Srinivas exclusively told OVERDRIVE that the company is very much capable of handling situations like the diesel ban in Delhi. He said that Isuzu has a wide array of engines in the world and will use the Indian and Japanese R&D to effectively handle such issues.