It's been a rather rainy start to the 2016 Formula 1 season, with showers coming down during both Friday Free Practice sessions in Australia. In spite of the rain, Lewis Hamilton kicked off his title defence well, topping a very wet FP1. Unfortunately for most drivers, the rain meant that they had to limit their running on track, which also meant that beyond an installation lap, there wasn't much else that could be done during the first hour of Free Practice. 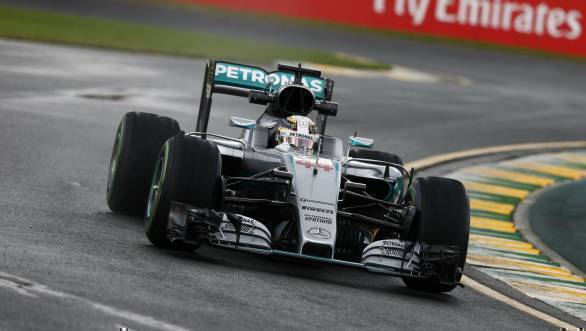 It was in the final 15 minutes of the session that there was a mad dash at the head of the order, with drivers who were on slick tyres making it to the head of the pack. Eventually it was Hamilton who topped the timing sheets, ahead of Red Bull Racing duo Daniil Kvyat and Daniel Ricciardo. Fourth place in FP1 was claimed by Nico Hulkenberg for Force India, while Toro Rosso's Max Verstappen was fifth. Rosberg made it to sixth fastest, while Fernando Alonso and Jenson Button put McLaren seventh and eighth. Sergio Perez and Kevin Magnussen completed the top 10.

During the second Free Practice session of the day, it was once again Hamilton who topped the timing sheets, while his team-mate suffered a crash that did heavy damage to his Mercedes. In fact, so heavy was the damage that Rosberg was advised not to attempt to bring the car back into the pitlane. Finishing second in the session was Hulkenberg, while Kimi Raikkonen put Ferrari third in the timing sheets.

Red Bull's Ricciardo was fourth once again, while Carlos Sainz's Toro Rosso team managed to sort out the difficulties he had during FP1, helping him to fifth overall. Both the McLarens made it to the top 10 once again, with Alonso and Button sixth and seventh overall. While, Vettel was eighth fastest. Perez and Kvyat completed the top 10.