With the start of the 2016 DTM season looming over our heads, excitement levels are at the all-time high. To set things into motion, the first event of the season is the one-make Audi Sport TT Cup at Hockenheimring, Germany. There will be two races held, one on May 7 and the other on May 8. For the first time, there will be 16 drivers at the grid, which will be a mix of fresh and experienced blood. 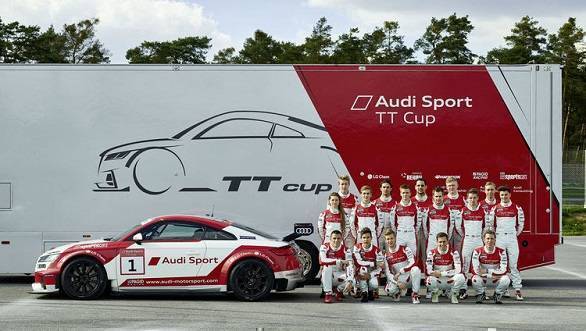 A new addition to this season is the Rookie class, within which 10 of the newcomers will go neck and neck to grab the title of the best rookie driver. At the other end of the spectrum, proven drivers Andreas Mikkelsen and Scott Speed will be at the grid as well. Mikkelsen is a factory driver for Volkswagen at the World Rally Championship (WRC) and has won the 2015 Rally Spain. Speed participated in Formula One in 2006 and 2007, and has won the Global Rallycross Championship (GRC) in 2015. The one-make race will feature the 314PS Audi TT Cup car.

Proceedings will start with free practice at 11:25 on Friday, followed by a 30-minute qualifying session at 09:05 on Saturday, shortly before race one at 12:10. Race two will commence at 16:20 on Sunday. The race will be aired live by SPORT1 on free-TV, with race one being aired at 22:30 CEST on Saturday and race two at 23:15 CEST on Sunday.

The rounds can be watched live at either www.sport1.de or www.audimedia.tv.