2015 Rally of Maharashtra: Gaurav Gill leads at the end of Day 1

The first round of the Indian Rally Championship, the Mahindra Adventure Rally of Maharashtra, got underway amidst the picturesque hills of Nashik.

At the end of the first day of rallying Gaurav Gill (co-driven by Musa Sherif) of Team Mahindra Adventure leads the event, the only tarmac rally of the season, with a commanding lead over his team-mates Amittrajit Ghosh (co-driven by Ashwin Naik) and Sunny Sidhu (co-driven by PVS Murthy). 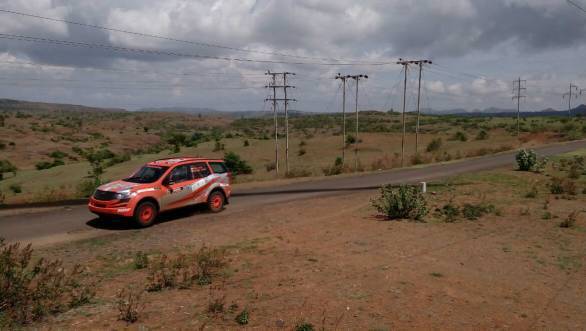 At the end of Leg 1, Gaurav Gill and Musa Sherif lead the 2015 Rally of Maharashtra

Gill finished the six Special Stages with a total time of 57 minutes and 28 seconds. It wasn't all too easy for the defending champion, though, with Samir Thapar of JCT Rallying posing a serious challenge to the Mahindra. In fact, even before the rally began, Gill had remarked that the power deficit of his Mahindra SuperXUV when compared to Thapar's Mitsubishi Evo X was one of his biggest concerns.

While the duo did have a close fight early on in the rally, with Arjun Rao Aroor piloting a Volkswagen Polo R2 also giving them some competition, on SS3 Thapar lost control over his Evo and slid into a ditch at a hairpin bend. Although the car lost its rear bumper, he managed to complete the stages, but the loss of time wasn't something he could make up for.

In the IRC2000 class, it was Rahul Kantharaj and Vivek Bhatt in the Team Yokohama Cedia, who headed the timing sheets at the end of the day.

Dean Mascarenhas was the youngest driver in the top ten. His overall time of 1 hour 2 minutes and 31 seconds was impressive as he ended the day seventh overall. This also means that Dean currently leads the IRC1600 class in a Volkswagen Polo.

The FMSCI1600 Cup sees Dhruva C and Jeevarathinam leading their class at the end of Day 1.

All in all, Nashik has proved to be a thrilling setting for the first rally of the season (given that Rally of Goa, the intended season-opener, was cancelled). The nailbiting got fierce during the final stage of the rally, with a spell of rain making things particularly challenging for the drivers to navigate. This put paid to Aroor's chances with the driver having to go slow to ensure that his Polo, shod with slicks, didn't go off the road. So tough was the stage, that young Dean Mascarenhas likened it to driving on ice.

Besides Samir Thapar's accident, the driver and navigator duo of Kongettira Bopiah and Konganda Karumbiah had an accident just two kilometers into SS1. Going into a corner, their Polo slid off the track and into a ditch. With the help of spectators, they managed to get the car back on the road and continue, albeit with a punctured front left tyre.

Leg 2 of the Mahindra Adventure Rally of Maharashtra begins tomorrow. Stay tuned to OVERDRIVE for all the action.