2015 MotoGP: Possible race results at Valencia and the championship outcomes in each case

A lot has happened in the aftermath of the #SepangClash. Valentino Rossi, who will start from the back of the grid at the race, has said that he's not sure whether he will compete in the MotoGP season finale at Valencia after all. Repsol Honda has issued a press release saying that Marc Marquez's brake lever received some impact and that they believe this impact was a result of Rossi's kick. Movistar Yamaha has countered that in a press release of their own. And they have also said that there are only two outcomes of the Valencia GP. Both involve one of their riders winning the 2015 MotoGP championship. But who will win in what scenario. Let's take a look. 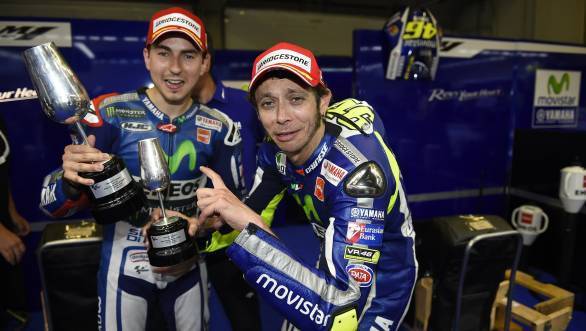 Here Lorenzo and Rossi are joking around. But the race at Valencia is no joke. And neither will be the outcomes.

Valentino Rossi heads to Valencia with 312 points, while his team-mate Jorge Lorenzo has 305 points - that's a seven-point advantage for the Italian rider. Valentino Rossi will start dead last on the grid. Lorenzo is most likely to start either from the first or second row, which means it is major advantage for Lorenzo. There's a very good chance that he can win the race - he's won there twice in the past (2010 and 2013). If Lorenzo does win the race, he will have 25 points added to his kitty, taking his championship tally to 330 points. This could, in theory, win him the title. UNLESS Rossi finishes second. There are 20 points awarded to the rider who finishes second, which means that Rossi will have 332 points, and will win the title.

Should Lorenzo finish second, which means he will have a total of 325 points, Rossi needs to finish third to win the title, as a third-place finish will take his total up to 328. In this scenario, if Rossi finishes fourth, he will score 13 points, which means he will tie with Lorenzo on points, but the championship title will go to Lorenzo by virtue of the fact that he has a higher number of wins this season than Rossi. 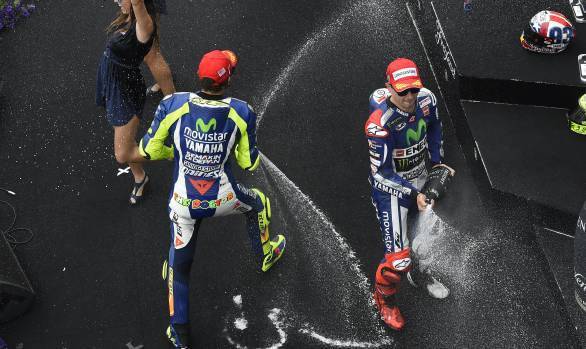 Tension between the team-mates aside, Yamaha is satisfied that both outcomes at Valencia will involve one of their riders taking home the title

If Lorenzo finishes third and gets 16 points added to his score, he will end up with a total of 321 points. In this case Rossi will need to finish sixth or higher. A sixth-place finish will mean Rossi will end the season with 322 points, one point higher than Lorenzo.

What are the other scenarios in which Rossi can take home the title? There's the possibility that his rival might not finish the race, thus not scoring any points at all, which means that Rossi is in the clear.

But there's another, far more exciting scenario, that we must consider. The possibility, however slim it may be, that Valentino Rossi will finish ahead of Lorenzo on track. If Rossi finishes ahead of Lorenzo, no matter what position they are in, the title will go to the Italian once again.

What a thrilling way to end the MotoGP season. We cannot wait!