Motorland Aragon was witness to a terrific qualifying session, complete with Marc Marquez shattering the lap record at the track and then losing his front end during his third and final run of the session. 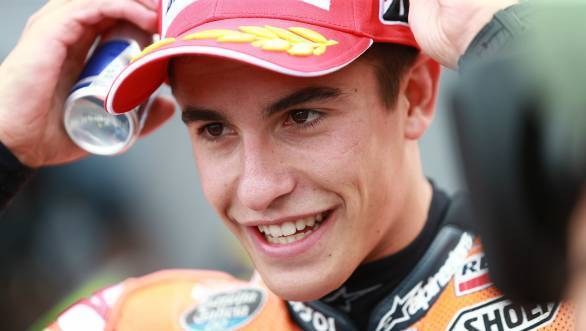 Marquez, the reigning world champion, clocked a lap-record-breaking time of 1min 46.635s. This bested Jorge Lorenzo's lap, forcing the Yamaha rider to settle for second place by 0.108s. Andrea Iannone, ailing due to a shoulder injury, still managed to soldier on astride his Ducati, and, with third fastest, will also start on the front row. This, in stark contrast to his team-mate Andrea Dovizioso who didn't make it past the first qualifying session, having to settle for 13th on the grid.

And while it looked, at one point, like Marquez was likely to better his time during his second run, he wasn't able to. Then on his third and final outing, he fell, but escaped without injury.

What of Valentino Rossi? The championship leader, who currently heads the title race with an advantage of 23 points over team-mate Lorenzo, clocked the sixth-fastest time, which sees him start tomorrow's Aragon GP from the second row of the grid. Rossi's best time was 0.857s off the pace of Marquez.

Starting alongside Rossi on Row 2 are Pol Espargaro and Dani Pedrosa.

Marquez's new lap record around Aragon is a full 0.552s better than the record that he set last year.