Movistar Yamaha rider, Jorge Lorenzo won the 2015 French Grand Prix, putting up a critics- silencing performance at Le Mans. The Spaniard began on P3 and made a good start after the lights went out. A momentary scrape with Iannone before turn one saw him push the Ducati rider into Marquez who was trying to pass Iannone on his left. They made contact, however, all the three riders made it through unscathed. Marquez made a daring move in C2, braked late , but ran wide on the exit, handing the lead to Lorenzo. From then on, Lorenzo , rode a flawless race to the finish. Falling to P4 after the opening lap skirmish, pole sitter, Marc Marquez struggled for a major part of the race. He was losing pace gradually and fell within Valentino Rossi's striking range. The Italian passed Marquez swiftly and began chasing the Ducati pair of Iannone and Dovizioso. With 18 laps to go, Rossi attacked and passed Iannone in one swift move. Two laps later, Dovizioso was chasing the rear end on Rossi's Yamaha M1. Lorenzo, meanwhile, had opened up a comfortable 1.7 second gap to Rossi in P2. The Italian gave chase but Lorenzo had an answer to every attack. Doing what he does best when leading a race, Lorenzo kept pulling away and at one stage maintained a 2.5 second gap to Rossi. He eventually crossed the finish line a good 3.8 seconds ahead of his team-mate. 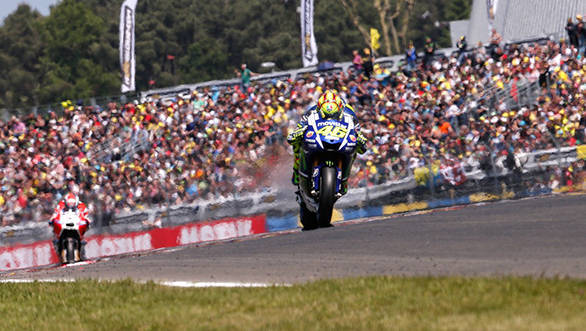 Down the order, Tech 3 Yamaha rider Bradley Smith was in P5 after demoting Marquez to P6. During the closing stages of the race, he tried to make move on Iannone into a corner but got a surprise from the master of late braking, Marc Marquez. Marquez out braked Smith and Iannone into the corner, but ran a bit wide to allow Iannone to maintain P4 as he grabbed P5 from Smith. What then ensued was one of MotoGP's most epic battle. In true sportsman spirit, Iannone while nursing a dislocated shoulder, put up a brave fight for P4.

The Ducati had the pace to match the the Honda on the straights and that allowed Iannone to catch and pass Marquez after a corner. The two kept exchanging positions on numerous occasions. Marquez then dug deep as he made a spectacular move on Iannone while entering a corner. Braking later than ever, he managed to make the move stick and exited the corner ahead of Iannone.

Post the race Marquez said that he was battling with his bike as he lost the front end feel. He added that it was due to the sudden rise in track temperature. A fact that was evident from the crashes of Honda RCV2013V riders, Dani Pedrosa, Cal Crutchlow and Scott Redding. The trio slid off after failing to read the grip levels. 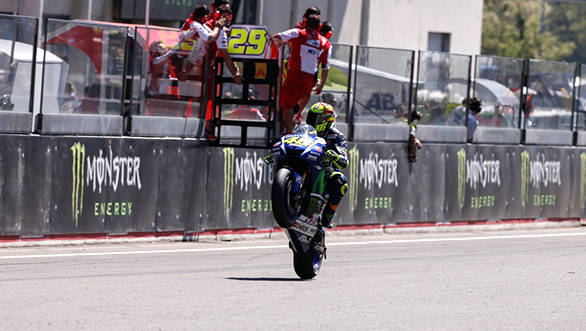 After five out of 18 races, Valentino Rossi leads the championship with 102 points. With two consecutive wins, Jorge Lorenzo moves up to second spot with 87 points after demoting Dovizioso to third with 83 points. Reigning champion, Marc Marquez is fourth with 69 points.