Mercedes has just launched the S 600 Guard for Rs 8.9 crore (ex-Delhi).  Essentially a standard S 600 but with about 1.7 tonne worth of armour, the Guard is one of the safest forms of transportation on four wheels. 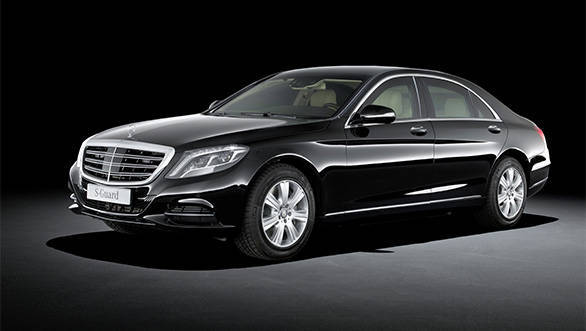 Mercedes-Benz also sells the E-Class and ML-Class in Guard form but those cars offer lower levels of protection (VR4 and VR6 which can withstand assault from a large caliber revolver and larger guns respectively). The S on the other hand has a protection level of VR9 which can handle attacks from assault rifles, grenades, Improvised Explosive Devices (IEDs) and even a single hit from a sniper rifle. In fact, the car is the first and only manufacturer assembled luxury vehicle to achieve VR9 level of protection. Protection comes through super thick doors and mirrors as well as fire and security alarm systems. The tyres are a special kind of run-flat which can be driven for around for 80km even after they are deflated. These cars undergo lots of tests.

A heavy vehicle like this needs big power which is why a twin turbo 530PS V12 petrol is found under the hood. The Mercedes-Benz S 600 Guard also gets a fire fighting system that blows out fire extinguishing material from under the car.

Despite all the safety, the S remains a supremely luxurious vehicle. Watch out for our drive report, set to come out soon.